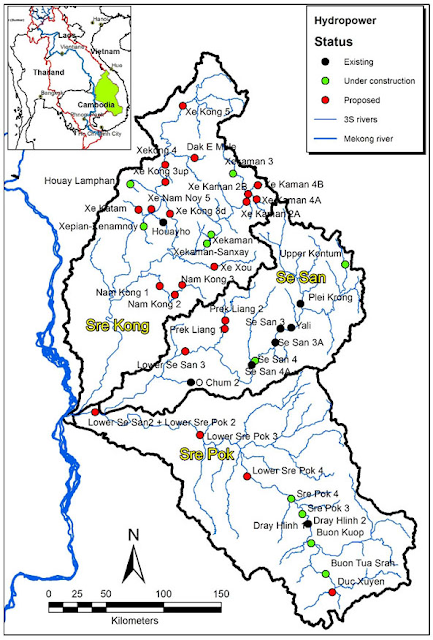 The Sesan, Sre Pok, and Sekong basins (3Ss) straddle Cambodia, Vietnam, and Lao PDR, and have been targeted for rapid development of hydropower.  Understanding the impact of flow changes due the operation of cascading dams is critical to address transboundary issues, including power generation and potential alteration of downstream ecosystem productivity.

The Sesan, Sre Pok and Sekong river basins (3Ss) are located in the south eastern part of the Mekong Basin and have a total drainage area of 78,650 km2. The 3Ss straddle Cambodia (33%), Lao PDR (29%), and Viet Nam (38%). The Sre Pok and Se San rivers flow from the Central Highlands of Viet Nam through Cambodia and join with Sre Kong, which flows from Annamite mountain in Lao PDR about 40 km before merge with the Mekong River mainstream at Stung Treng. Annual rainfall over the basin varies from 1,100-3,800 mm, with the higher rainfall intensities occurring in the Highlands of Lao PDR and Viet Nam. Annual flow at the outlet is about. Annual discharge from the 3Ss represents approximately 17-20% of total annual flows of the Mekong mainstream (91,000 mcm or an average of 2,886 m3/s), making it the largest tributary contribution to the Mekong basin and therefore of significant importance.

Over 2 million people live in Viet Nam part while in Lao PDR and Cambodia there are only 260,000 and 230,000 people, respectively. Most people in Lao PDR and Cambodia  still live close to the river system and remain highly depend on natural resources and ecosystem services while the Central Highlands of Viet Nam have a dense population and are undergoing a rapidly accelerating development.

The impact of dam development along the 3Ss and dam operation scenarios were modelled with the HEC-HMS (Hydrological Modelling System), SWAT, and HEC-ResSim (Reservoir Simulation) models to quantify the magnitude of potential changes to water flows and levels. Simulations were conducted on a daily time step.
An overview of results from some of our modelling efforts were presented at the Stimson Center in August, 2011.  The video interview and powerpoint presentation can be seen here:
http://www.stimson.org/video/interview-with-dr-tom-cochrane/

“Where There Is Water, There Is Life” Or Story About Serepok River

Unconventional, from its source flowing into the sea like other rivers, the Serepok river of the Central Highlands. It flows back upstream into Cambodia. Serepok river (or Srepok), the Khmer name is Tonlé Srepok. It is the largest river in the river system in Dak Lak.
This is an important tributary of the Mekong River. People also call it Dak Krong River. It is 406 km long from the confluence of the Krong Ana and Krong No rivers to the mouth of the river. With a length of about 126 km in the Vietnamese territory and about 281 km in length in Cambodia.
In the ethnic languages of the Central Highlands and Southern Laos, “Se” was a river, and if called correct, it should be Se Rêpôk. 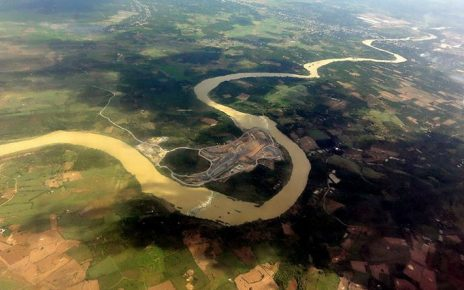 Serepok River from above

Located in the west of the Truong Son River, Serepok river flows to Cambodia before entering the Mekong River. After which the large river returns to Vietnam. Serepok river is formed entirely in Dak Lak. it is composed of two small rivers Krong Ana (Mother River) and Krong No (Father river). The river flows through Krong Ana, Buon Don and Ea Sup districts of Dak Lak.

The Tay Nguyen legend says that Krong Kno and Krong Ana were just a Serepok river. At that time, a boy from Buon Kuop fell in love with a girl on the other side of the river. Their love grows bigger until they are discovered by their relatives. These two families have had a grudge against each other hundreds of years ago. So do not accept the descendants love each other, find ways to prevent and divide the love couple. But because they love each other, they both find ways to resist. On a cool moon night in the Serepok river, the couples have jumped into the river together. After they died, the black clouds suddenly came from many places, the sky was black, the river flowing rushing water. Tomorrow morning, when people wake up, the river has turned into two lines.

Another tributary of the Serepok River is Dak Dam, which is Cambodia’s prek Dak Dam. Which is more than 100 km long and runs north-south along the border between Vietnam and Cambodia.

At the end of the 19th century, when people didn’t develop the road in Daklak, Serepok was one of the important trade routes in the area. Lao and Cambodian people often sail upstream to trade and exchange goods with the highlands of Dak Lak in Vietnam. Ban Don has since become a crowded commercial port then; may be like Hoi An of Da Nang or Pho Hien – Hung Yen.
The Lao people had come here to trade here, and have built up a Ban Don which is famous for its unique cultural identity.

Posted by nhomlymha at 1:23 PM