The Sambor Dam Is a Tragic Mistake for Cambodia


by Sabrina Gyorvary – October 24, 2017
Planned mega-dam threatens fish populations and food security in the lower Mekong Basin
Auntie Punleu has spent most of her life on Koh Dambang, an island set in the middle of the Mekong River in Cambodia. A small, grandmotherly woman, she paints an idyllic picture of life there.
“We catch fish as our main food every day. We eat fish nearly six days a week,” she says. With her gentle strength and keen knowledge of community affairs, people on the island look to her as a natural leader. “My children and grandchildren have enough food to eat every day and they are healthy. We do not need to spend money to buy fish. We do not need to beg people for them. They come naturally from the river.” 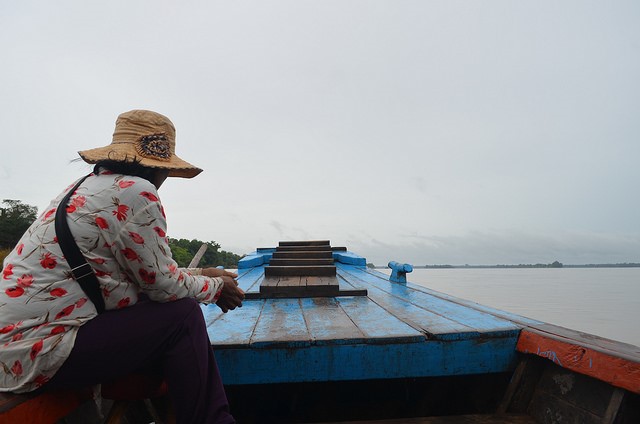 Photo by International Rivers
The Mekong River is threatened by a mega-dam project in the Sambor District, one of 11 large hydropower dams planned for the river's lower mainstream.


A few kilometers away, Uncle Songom, a resident of the quiet riverside village of Svay Chek, echoes Punleu: “My family have enough food and my children are healthy because of the Mekong River.”

Punleu’s story is replicated up and down the riverbanks. The livelihoods and cultures of 60 million people in the lower Mekong Basin are intimately connected with the Mekong River’s natural cycles. Boasting one of the world’s most diverse and productive inland fisheries, the Mekong supplies people in the region with approximately 80 percent of their protein needs. For families living on the margin, the river is an invaluable source of both protein and income.
But this vital lifeline is now at risk, and families like those of Punleu and Songom face an uncertain future. Regional governments are pushing forward a series of large-scale hydropower dam projects that are threatening the Mekong’s abundant fisheries, and consequently the food supply of millions.

This past September saw the inauguration of the Lower Sesan 2 Dam, a project that fisheries experts warn will block fish migrations on two of the major tributaries of the Mekong River, the Sesan and Srepok rivers, causing a 9.3 percent drop in fish biomass for the entire river basin. The dam is also expected to flood 36,000 hectares, displacing about 5,000 people. The plans for these large-scale projects are typically conceived and approved in secret, and the communities who stand to lose the most are never consulted.

The dams that clogged rivers in the American west in the twentieth century decimated salmon populations, blocking their access to traditional spawning grounds. Now it looks like the same sort of catastrophe is headed for the Mekong, but on an even larger scale. The Sambor Dam alone would block major fish migrations between Southern Laos and Cambodia’s Tonle Sap Lake, destroy critical deep pool fish habitats, and interrupt the river’s hydrological, sediment, and nutrient cycles, impacting the river’s wider ecology.

Combined, the 11 dams on the lower Mekong would block the major fish migrations that are essential to the life cycle of around 70 percent of the Mekong River’s commercial fish catch. This would result in a total estimated fishery loss of 26 to 42 percent, placing at risk the livelihoods and food security of millions of people.

This would be devastating to Cambodia food security. The country’s per capita consumption of inland fish is among the highest in the world and its people depend on fish for nearly three-quarters of their protein intake. According to one estimate, Cambodian fishers pull between 289,000 to 431,000 tons from the Mekong every year.

And impacts would extend beyond those to fish. In addition to providing Cambodia’s main source of protein, the Mekong supplies water for the cultivation of rice in an area where irrigated land is scarce. “We can grow rice even in the dry season by pumping water from the river to our rice paddies,” Puleau explains. “The river is absolutely essential to us.” 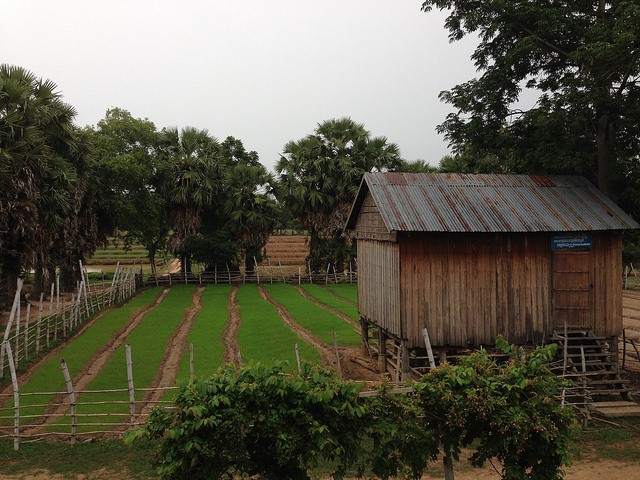 
The Mekong River supplies water for the cultivation of rice,
as well as for drinking and other household uses.

The Mekong also serves as the community’s only reliable source of water for drinking and household use. “The river is central to our daily lives,” says Bunleap, a homemaker and mother of three on Pdau Island. “Not only do we bring water from the river to cultivate our rice fields and vegetable gardens, we also use it for cleaning, cooking, and drinking.”
Dams upstream are already changing the river, and the area’s residents are no longer able to count on the Mekong to meet their needs.

Just five years ago, Punleu’s son-in-law could earn 300,000 Riel (US $75) per fishing trip. He made two to three trips per week. This income provided a critical safety net, helping the family cope with unexpected shocks such as hospital bills. Now her son-in-law earns only 100,000 Riel (US $25) per trip — his income has declined by two-thirds.

When asked about the reason for this sharp decline, Punleu says, “I suspect upstream dams could be one of the reasons.” So far, seven megadams have been built on the upper Mekong in China, and construction is well underway on the Xayaburi and Don Sahong dams in neighboring Lao PDR. Despite these projects’ profound impacts on the food security of Cambodia, they have proceeded with no transboundary environmental impact assessments, and no consultation with affected communities downstream. “I need more information regarding these dams’ impacts,” says Punleu.

Bunleap’s family is also finding it harder to catch fish. Five years ago, the fish they caught for sale provided a crucial source of income. “Now we usually only catch enough fish to eat within our family, and sometimes, we don’t even catch enough to eat,” she says. “I don’t know why. Now we sometimes have to buy fish to cook. My husband has had to change his career from fishing to work as a logger.”

Punleu, too, is seeing more family members go off to the forest to log trees. She’s saddened by this turn of events, and well aware of the unsustainability of this new enterprise. “What career will we have in our village when there are no more forests to log?” she asks. “In the future, if this decrease in fish continues, making a living will become more and more difficult, and my children’s nutrition will suffer. This could really harm my children’s health.”
Punleu’s fears are well founded. A 2013 report financed by Danida, Oxfam, and the World Wildlife Fund shows that the combined impact of mainstream dams and population growth could reduce consumption of fish in Cambodia from 49 kilograms per person per year to as little as 2 kilograms by 2030. This would have a profound impact on child nutrition in a country where nearly 40 percent of children under five are chronically malnourished, more than 28 percent are underweight, and roughly 11 percent are acutely malnourished.

Songom shares Punleu’s concern. “If the fishing gets any worse, I’m scared that I won’t be able to feed my family,” he says. “I am worried that my children and grandchildren won’t have enough food to eat every day, and that they’ll get sick.”

Five years ago, many people in Bunleap and Songom’s villages caught fish not only for their daily meals, but also to make supplemental foods like prohok (fermented fish) that can be stored long-term. For many poorer Cambodians, prohok is the only affordable source of complete protein available year-round, and it’s crucial to the country’s most vulnerable communities.

Fish and fish products like prohok are critical sources of iron. Already in Cambodia, an estimated 70 percent of pregnant women and 74 percent of children under the age of five suffer from iron deficiencies. Iron shortages rob people of energy, ultimately perpetuating the cycle of poverty.

A decline in fish could also result in weakened muscles and bones associated with calcium deficiency; body-wasting and memory-loss associated with zinc deficiency; decreased resistance to disease from insufficient Vitamin A; and mental retardation caused by too little iodine.
Food security is a foundation on which other important forms of development are built, and wild-capture fisheries are a vital source of nutrients to rural families throughout the Mekong region. As such, protection of wild-capture fisheries should be central to poverty-reduction efforts.
Cambodia still has time to pull back from this path. The Cambodian government could embrace the innovative renewable and decentralized electricity technologies like wind and solar, which are now available and cost-competitive, and could help Cambodia avoid these large-scale and destructive mega-dam projects. By adopting national energy policies that encourage investment in these new energy technologies, the Mekong governments could start growing sustainable, modern economies without losing the many benefits that healthy rivers bring. Punleu, for one, would thank them.
All names have been changed to protect people’s identities.