NEW FEAR FOR THE MEKONG: NO SEASONNAL FLOW REVERSAL IN THE TONLE SAP (English & VNese language) 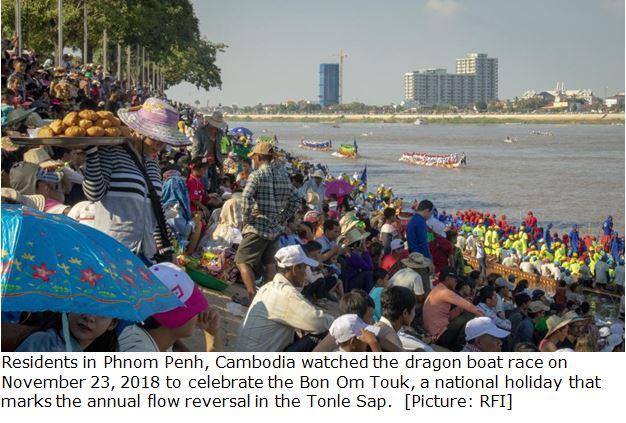 Last year, a combination of climate change, El Niño and dams on the Mekong mainstream and tributaries caused the Tonle Sap to reverse its flow lately, in August instead of June, and lasted only 6 weeks instead of months [3].  This year, the Tonle Sap may delay its flow reversal again because the water levels in the Mekong river at Stung Treng, Kratie, Kampong Cham and Neak Luong are still below their minimum levels recorded between 1960 and 2019, according to the Mekong River Commission (MRC) [4].  These delays have caused some experts to fear that the Tonle Sap may not reverse its flow at all.  This would not only reduce permanently the fish catch, but also threaten the entire ecosystem of the Tonle Sap [5] and the MDV.

The flow reversal in the Tonle Sap is an important hydrological event that was specified in Articles 5, 6 and 26 of the 1995 Mekong Agreement [6].

Article 5. Reasonable and Equitable Utilization.  To utilize the waters of the Mekong River system in a reasonable and equitable manner in their respective territories, pursuant to all relevant factors and circumstances, the Rules for Water Utilization and Inter-basin Diversion provided for under Article 26 and the provisions of A and B below:

A. On tributaries of the Mekong River, including Tonle Sap, intra-basin uses and inter-basin diversions shall be subject to notification to the Joint Committee.

B. On the mainstream of the Mekong River:

Article 6. Maintenance of Flows on the Mainstream.  To cooperate in the maintenance of the flows on the mainstream from diversions, storage releases, or other actions of a permanent nature; except in the cases of historically severe droughts and/or floods:

A. Of not less than the acceptable minimum monthly natural flow during each month of the dry season;

B. To enable the acceptable natural reverse flow of the Tonle Sap to take place during the wet season; and,

C. To prevent average daily peak flows greater than what naturally occur on the average during the flood season.

The Joint Committee shall adopt guidelines for the locations and levels of the flows, and monitor and take action necessary for their maintenance as provided in Article 26.

Article 26. Rules for Water Utilization and Inter- Basin Diversions.  The Joint Committee shall prepare and propose for approval of the Council, inter alia, Rules for Water Utilization and Inter-Basin Diversions pursuant to Articles 5 and 6, including but not limited to: 1) establishing the time frame for the wet and dry seasons; 2) establishing the location of hydrological stations, and determining and maintaining the flow level requirements at each station; 3) setting out criteria for determining surplus quantities of water during the dry season on the mainstream; 4) improving upon the mechanism to monitor intra-basin use; and, 5) setting up a mechanism to monitor inter-basin diversions from the mainstream.

Hydrology of the Tonle Sap system [7] 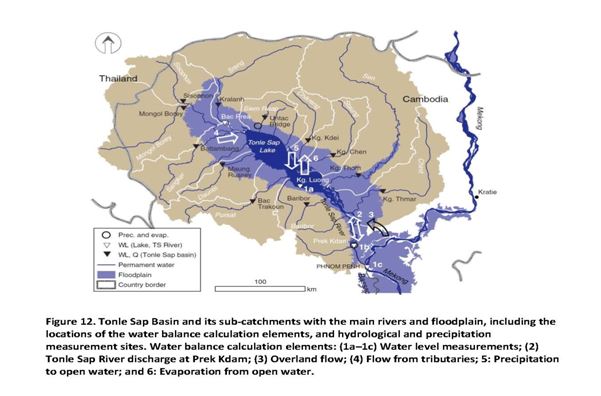 ▪     On average, the first annual reversal occurs in the first week of June, though it can take place one month earlier or later, reflecting the character and timing of the onset of the Mekong wet season proper. Peak discharges towards the lake usually occur in late August;
▪     This lake inflow phase generally lasts for four months, typically ending at the end of September, though again there is some latitude, of the order of plus/minus two weeks;
▪     Maximum contributions from the lake to the Mekong mainstream take place during November;
▪     In many years the change from the lake inflow to outflow phase is precipitous with a switch of up to 7,500 m3/s from one direction to the other over only a few days; and
▪     March, April and May are characterised by flows towards the Mekong River of only a few hundred m3/s, reflecting dry season conditions and low head differentials. 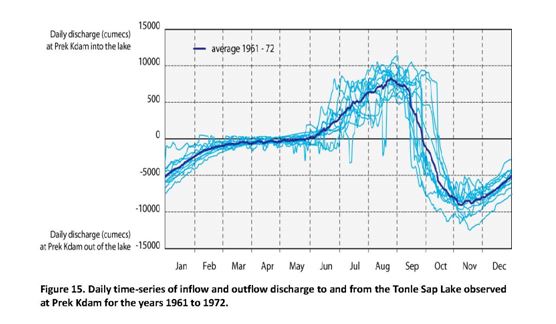 The effects this natural regulation of the Mekong flood or the temporary storage of flood water in the Tonle Sap lake are positive:

▪ Peak rates of flood discharge in the Mekong are attenuated, thus reducing the severity and extent of potential flood inundation in the Mekong Delta; and
▪ During the first half of the dry season months in particular, the release of water from the Tonle Sap system increases flows downstream of Phnom Penh such that the volumes and reliability of resources available for irrigation are significantly augmented and low flow conditions that are favourable to saline intrusion in the MDV are not as frequent as they would be without this natural flow regulation.
▪ August is typically the month of maximum discharge upstream of the confluence at Phnom Penh Port, with a mean monthly discharge of 32,000 m3/s. Downstream at Tân Châu (in the Mekong River) and Châu Đốc (in the Bassac River) in the delta, mean flows at this time are reduced by 5,000 m3/s and the month of maximum discharge delayed to September due to the attenuation effects of storage in the Tonle Sap system; and
▪ Flows during the dry season between November and February are increased significantly.

In addition, the natural regulation of the Tonle Sap system causes the flood levels in the MDV to rise slowly (less than 10 cm per day) and can be predictable; therefore, residents in the flooded areas have adequate time to prepare. 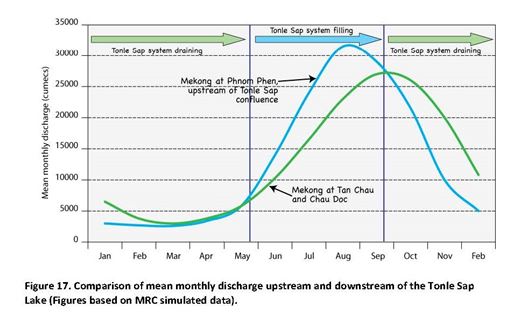 Maintenance of Flows on the Mekong Mainstream

Locations of the hydrological stations

In accordance with Article 26.2 of the 1995 Mekong Agreement, nine hydrological stations are selected as the basis for the maintenance of flows on the mainstream.  They include Chiang Saen, Vientiane, Khong Chiam, Pakse, Stung Treng, Kratie, Tân Châu and Châu Đốc.  Phnom Penh Port, Prek Kdam and Kampong Luong in the Tonle Sap system are selected for the flow reversal in the Tonle Sap. 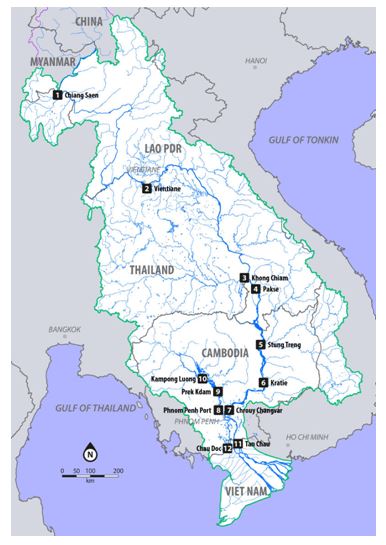 Article 6.A – Acceptable minimum monthly flows for each month during the dry season (from December to May):  Applied for all hydrological stations, except Kampong Luong and PrekKdam.  Agreed to test two options: ARI 1:4 to 1:5 or 80-90% FDC. 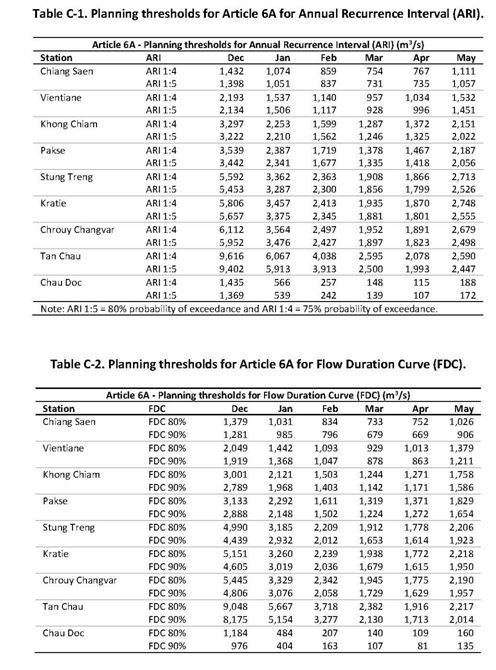 Article 6.B – Acceptable reversal flows in the Tonle Sap during the wet season (from June to Novembet):  Applied for Kratie on the Mekong and Prek Kdam and Kampong Luong on the Tonle Sap system.  The flow volumes during the wet season at Kratie are to be maintained within the upper and lower 90% Confidence Interval (= thresholds band) of probability of exceedance of the Baseline Scenario. 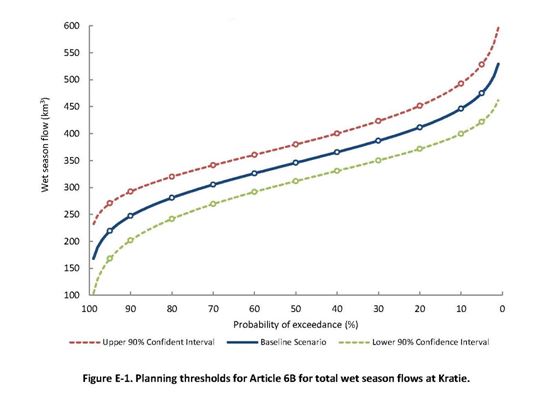 Shortcomings in the MRC Technical Guidelines

The second shortcoming is the complexity and difficulty in using the flow volumes during the wet season at Kratie and accumulated reverse flows at Prek Kdam to determine the flow reversal in the Tonle Sap during the wet season.  The flow reversal in the Tonle Sap can be simply and easily determined by using the water levels at Phnom Penh Port, Prek Kdam and Kampong Luong.

The third shortcoming is not taking into consideration flows from the tributaries, especially those with operational dams.  The most important is the amount of water released from the most downstream dam on the tributary, such as Nam Ou 1, Nam Ngum 1, Pak Mun and Lower Sesan 2. 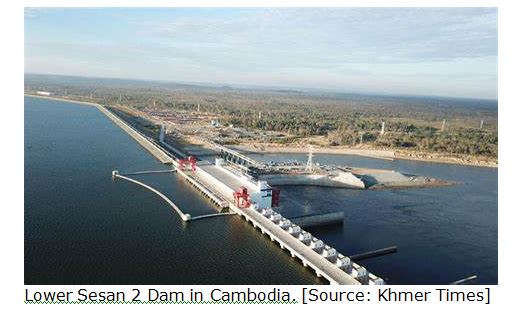 The last, but not least, shortcoming is the maintenance of flows of the Mekong river during the flood season (from August to November) at Tân Châu and Châu Đốc to maintain a “moderate flood” in the MDV, if the rainfall in the Mekong basin is favorable.  Known as “floating water” by the MDV residents, it can be maintained by allowing the daily water levels at Châu Đốc to fluctuate between the warning level of 3,80 m and the flood level of 4,20 m [9].  The benefits of the floating water have long been recognized by the MDV communities and were verified recently by MRC, with an average annual cost of floods in the Lower Mekong Basin ranging from US $60 to 70 milion and an average annual value of flood benefits ranging from US $8 to 10 billion [10].