When it comes to passing sediment downstream, proper dam design can make a significant difference. The authors present an alternative design for Sambor Dam in Cambodia that could create a sustainable reservoir with more than 70% of its capacity for hundreds of years.
By George W. Annandale, Prakash Kaini and Jennifer Patterson

Another issue related to reservoir sedimentation is the negative environmental impact to the downstream river ecosystem. Reservoirs behind dams alter the natural process of sediment transport in a river by trapping sediment.1 This adversely affects fish migration, causes river degradation downstream of the dam, and negatively impacts aquatic habitat and biodiversity by disconnecting the river system and the nutrient flow. There is a need to balance development aspirations and environmental needs. Sediment management should be an integral part of the reservoir system for the sustainable use of the resource and to safeguard the river environment.
This article presents the outcome of an assessment of sediment management options for Sambor Dam, which is being planned for construction on the Mekong River in Cambodia. This study was undertaken as part of the Natural Heritage Institute's work, with the Cambodian government, to examine options to minimize the negative consequences of dams in the Mekong Basin. The design described in this article is proposed as an alternative to the current design.

Sambor Dam is the furthest downstream among all existing and proposed dams in the Lower Mekong Basin, and the site is located near Sambor village. The proposed dam is 56 m high and 18 km long, with a rated head of 16.5 m. It will create a reservoir with 4,259 million m3 of storage. The trapping efficiency (i.e., the ratio of trapped sediment to incoming sediment) of the reservoir is estimated at more than 50% using the Brune method.3 The proposed installed capacity of the powerhouse is 2,600 MW, with an estimated 11,740 GWh of annual energy production.4,5,6

The objective of this study is to formulate a design that will improve sediment passage through the proposed facility to maintain sediment flows in the river. Sediment is vital to the health of the downstream fisheries in the Tonle Sap, mainstream of the Mekong River, and Mekong Delta. Tonle Sap is the largest freshwater lake in Southeast Asia and is ecologically critical to the local inhabitants. Tonle Sap is unique for two reasons: its flow changes direction twice a year, and the portion that forms the lake expands and shrinks dramatically with the seasons, up to five times.
Sediment passage is also an important consideration with regard to the longevity of the hydropower facility. This is an issue of great importance to the Kingdom of Cambodia to ensure continued and effective use of the facility once the concession period, which is typically 30 to 50 years, is over. The Reservoir Conservation (RESCON) model,7 which was developed by the World Bank in 2003, was used to evaluate the feasibility of drawdown flushing in this study.

There are various sediment management techniques for reservoirs: drawdown flushing, bypassing, dredging, density current venting, and hydro-suction removal. However, based on the large size of the proposed Sambor Reservoir (both its footprint area of more than 600 km2 and its volume) and its unfavorable geometry (i.e., its width of several kilometers and low gradient), none of these are considered feasible.
However, as illustrated in this article, passing sediment becomes viable if the design is modified. The two techniques facilitating sediment passage in the modified design are drawdown flushing and bypassing. They are jointly applied.
— Drawdown flushing: Drawdown flushing involves emptying a reservoir and then allowing the river to erode the deposited sediment and transport it downstream.8 A reservoir is brought to the original river-like condition by releasing flows through bottom outlets or large radial gates if a dam is low enough. Although drawdown flushing has been successfully accomplished at dams as high as 70 m to 80 m, it is deemed desirable to reduce Sambor Dam to lower heights, as shown later in the article.
Drawdown flushing is usually executed during a low-flow period and preferably just before a high-flow period, to allow the reservoir to be refilled with water once drawdown flushing has been completed.
Criteria exist to assess the potential for successful drawdown flushing.9 In general, drawdown flushing is successful in narrow, steep reservoirs where the river can migrate across the entire valley floor, thereby removing sediment from all portions of the reservoir. To implement drawdown flushing, it is necessary to have available low-level outlets that are large enough to drain the reservoir (i.e., large enough to pass the flushing design flow, which can range between one and two times the mean annual river flow) and to freely discharge re-entrained sediment downstream. 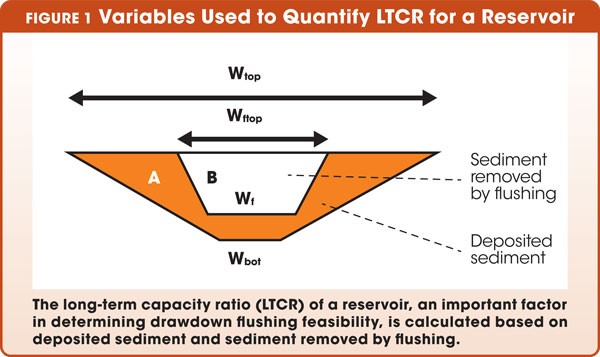 Flushing feasibility is determined based on two criteria: sediment balance ratio (SBR) and long-term capacity ratio (LTCR). SBR quantifies the ability to re-entrain and transport previously deposited sediment during drawdown flushing. SBR is the ratio between the amount of sediment that may be removed by the water flowing through the reservoir during drawdown flushing and the amount of sediment that has deposited in the reservoir between flushing events. LTCR is defined in Figure 1 on page 21 and in the following equation:
Equation 1
LTCR = Area B / Area A + Area B
The major criteria used in the RESCON model to assess the potential success for sediment removal by using drawdown flushing are SBR greater than 1 and LTCR greater than 0.35.
— Bypassing: Two principal bypass techniques exist; one uses bypass tunnels and the other uses river modification or existing river channels. In the case of Sambor Dam, the use of bypass tunnels is not desirable because the local topography does not allow for this arrangement. Tunnels require mountainous terrain, which is absent in the vicinity of the dam. However, the width of the Mekong River at the location of Sambor Dam extends over several kilometers, consisting of a number of braided channels. Using some of these channels to facilitate bypassing is possible, as demonstrated by the proposed alternative design. 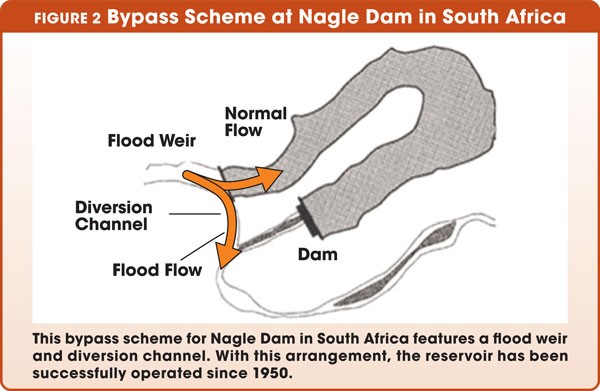 Figure 2 shows a bypass scheme designed for Nagle Dam in South Africa. The dam is located at the downstream end of a large river meander, and its reservoir is located in the meander bend. The river contains a high sediment load, but the reservoir has been successfully operated since 1950 with the bypass arrangement.


As an alternative to the proposed Sambor Dam design, this study revealed that a smaller reservoir (see Figure 2) with a bypass diversion would provide valuable benefits. Table 1 on page 21 presents the main features of the proposed and alternative dams. The alternative design would have reduced power output, but the reduction in construction cost arising from lowering the dam height by 5 m and decreasing the length to 3 km (vs. 18 km for the original design) will be significant. Additionally, the associated 80% reduction in inundated area and, therefore, reduced resettlement requirement (a few thousand vs. about 20,000 people) has great value. 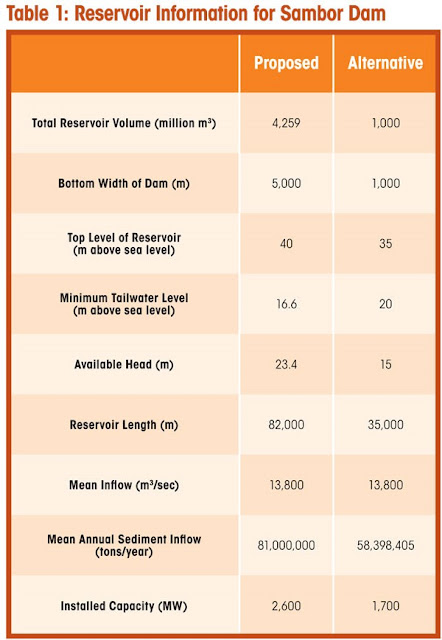 The goal of the alternative design is to create bypass flows that exceed twice the average flow (i.e., > 27,600 m3/sec), which corresponds to monsoonal flows. Flows exceed 27,600 m3/sec at this site about 13% of the time in any given year. About 28% of the total sediment load in the river will be bypassed through such an arrangement, never entering the reservoir. This means that 72% of the total sediment load — equaling 58,398,405 tons per year — will pass into the reservoir, of which some portion will pass downstream. It is estimated that use of a bypass channel alone will result in about 67.6% of the total sediment load in the river being passed downstream of the alternative Sambor Dam. When combining drawdown flushing with bypass, an additional amount of sediment will be discharged downstream, equaling about 90% of the sediment deposited in the reservoir. This will result in a sustainable reservoir that, in principal, will indefinitely retain more than 70% of its original capacity
The alternative design presented in this article results in a significant improvement when compared to the originally proposed design. For the original case, the analysis results indicate it is not hydraulically possible to remove the average amount of sediment deposited in the reservoir when using the average annual flow for flushing. Even if the flushing flows are increased by 50% to 100%, it is still not possible to hydraulically remove deposited sediment satisfactorily. The reason for this is that the channel that may erode into the reservoir bed during such flushing will be much narrower than the total width of the reservoir. Even though the sediment transport capacity of the water used for flushing may be high enough to transport the average amount of sediment deposited within a year, the narrow channel will make it geomorphologically unfeasible to remove the majority of the deposited sediment from such a wide reservoir. 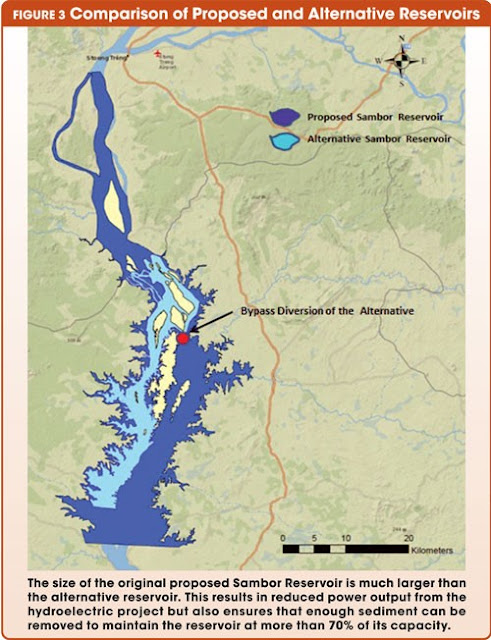 Table 2 on page 24 presents the flushing feasibility based on the RESCON analysis for the alternative and originally proposed designs. The low values of LTCR for the originally proposed design (0.08 to 0.12) are evidence of this conclusion. Interpreted differently, over the long term it will only be possible to retain about 8% to 12% of the original reservoir volume. The rest of the space will be consumed by deposited sediment. 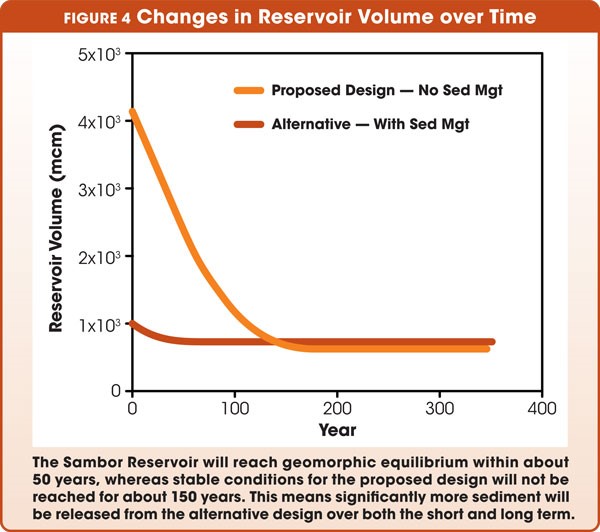 Figure 4 on page 24 relates the anticipated change in reservoir volume due to sedimentation to the number of years after project commissioning. Stable conditions will likely be reached in about 100 to 150 years, when the reservoir at the proposed Sambor Dam is expected to reach a state of geomorphic equilibrium. On the same graph, it is indicated that implementation of reservoir sedimentation management approaches (particularly drawdown flushing and bypass) in the alternative design will likely lead to a state of geomorphic equilibrium within about 50 years. This means that significantly more sediment will be released downstream from the alternative design over both the short and long term. The length of the short term is defined as the duration of the concession period. The long term is essentially an indefinite period but practically may be set at, say, 300 years.

In the authors' opinion, consideration of sediment management conditions for the proposed Sambor Dam indicates that short-term operational problems may be less of a concern than short- and long-term environmental and social concerns. The anticipated disinterest of the concessionaire in sediment management due to the fact that sedimentation will not significantly impact operations during the concession period is not the determining factor as to whether the dam and reservoir should be designed and operated to facilitate sediment management and passage, the authors believe. More important, the authors feel, is the need to preserve the long-term natural resource values provided by the Mekong River, Mekong Delta and Tonle Sap, thereby creating intergenerational equity and ensuring the livelihood and well-being of tens of millions of people.
Results of the study indicate it is possible to develop a dam design that increases the amount of sediment that can be passed through the Sambor Reservoir. But the alternative design comes at a price, resulting in an installed hydropower capacity of only about 65% of the originally proposed capacity. At the same time, the alternatively proposed dam and ancillary facilities will be much smaller than the proposed dam, thereby resulting in lower construction cost.
The alternative design is still economical. The fact that the amount of sediment passed downstream over the long term can be increased about 14-fold when implementing the alternative design is worth considering. In addition to improving sediment passage, additional benefits include better conditions for fish migration and spawning and lesser need for resettlement.

Email ThisBlogThis!Share to TwitterShare to FacebookShare to Pinterest
Labels: Information