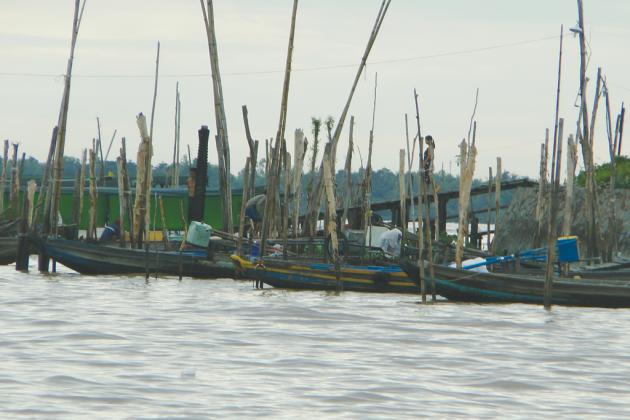 Erosion of riverbanks in the Mekong Delta in southern Can Tho province is a serious concern among authorities and local residents after the building of dams upstream.

Fish migration and sediment flow hit; threat from more seawater intrusion
Vo Van Co, a 49-year-old farmer at Vuon Man Ba Ho orchard in the Mekong Delta province of Can Tho, feels the environment has changed, as rain and water levels have fluctuated in recent years and affected his work - but he doesn't know why.
"Too much rain and water is not good for fruit gardens but flood and erosion are worse for us, as we plant on the bank of the river," Co said.
He does not own the 1.7-hectare orchard but is an employee who earns his living from the garden. The yield from the fruit affects his life and family, he said.
Changes in the Mekong River and the delta over recent years are not illusions - concerns have been raised by local people and officials in Vietnam.
Local ecologist Nguyen Huu Thien said the delta now faces three major threats: climate change, "errors" in domestic development and projects upstream on the Mekong River.
The impacts of climate change were real and people had felt them, he said, noting that rising temperatures and an increase in the sea level had happened, along with less predictable rainfall and stronger storms.
"Mistakes" from development have occurred in all countries around the world, including the Mekong Delta in the far south of Vietnam. Development activity aimed at boosting economic growth has polluted the environment and damaged the ecological system.
The impact from climate change had been gradual and people have adapted.
The government could also correct mistaken development by changing its policies, he said. But, the sudden impact from projects upstream, notably hydropower dams was the biggest concern for people in downstream on the river, Thien said.
"Our concern is that, once dams are built, the impact will be permanent and irreparable," he said.
Countries upstream on the Mekong are building and planning to build a number of hydropower projects that will block the river. China has built five dams in the northernmost section and plans to build three more on the river's mainstream.

More dams in Laos
Laos is building one in Xayaburi, south of Luang Prabang, and plans another at Don Sahong in Siphandon, near Cambodia.
Huge structures blocking the flow of a river like the Mekong is a real problem for many downstream whose livelihood depends on the river. Thien said dams alter the flow of sediment and fish migration.
Sediment is important for the formation process.
The Mekong Delta would never have formed without sediment deposits from upstream tens of thousands years ago, he said. Sediment also brings nutrients to feed animals and fertilise plants in the delta. It is important for agriculture, aquaculture, the ecosystem and marine life, he said.
Less sediment would cause a "hungry water" phenomenon, he said, eroding banks and the river base.
Building more dams upstream would also affect the delta's hydrology, and water means everything for people in the area.
"We are near the sea, so businesses depend on freshwater and seawater; and at the boundary of salinity coming into the delta is a battle between freshwater and the sea," he explained.
If the freshwater current is weakened, seawater would intrude further.
Operating dams upstream affects the flow of freshwater into the delta. "That means it will be very difficult to predict where the boundary of salinity will be," Thien said.
This was making things very difficult for people in the delta, he said, who have to adjust their livelihoods to adapt to rapid changes.
Another problem, which has been widely noted, is fish migration, as the dams create barriers that prevent them going up and down the river.
There are two major kinds of fish in the delta: black and white. The white fish needs to migrate annually to breed.
"Fish is an important source of protein for us, such that it is not replaceable," he said.
A survey by An Giang University recently found that freshwater fish consumption by people in An Giang province, in the delta, was 35 kilograms per capita.
Some people say aquaculture could replace this natural source of protein for people, but Thien disagreed, saying that aquaculture fish depend on wild captured fish for feed, and aquaculture fish also depend on "trash" fish from marine catches "and thus goes back to the problem of nutrient supply".
"Everything is interconnected," the ecologist said.
The Vietnamese government is preparing a Mekong Delta Plan with a vision for the year 2100, with help from officials from the Netherlands.
But with potential impacts from upstream development still not clear, no immediate measures have been proposed yet on how people in the delta should adapt, he said.
Le Duc Trung, director-general of Vietnam's National Mekong Committee, said the impact from upstream dams had already been felt in the delta after five dams in China - on water levels, sediment loss and erosion now occurring.
Vietnam may have some plans to handle the situation but as 90 per cent of water flow to the delta comes from upstream countries, a more effective way to manage the problem is to get cooperation from them, Trung said.
_ This is the first of a two-part report on changes in the Mekong Delta in southern Vietnam, where people face threats from climate change, development "mistakes" and dams built upstream on the Mekong River.

Posted by nhomlymha at 1:30 PM