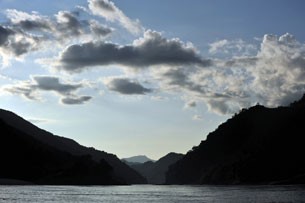 Developers of a second dam proposed on the Mekong River in Laos have completed the design and impact assessment for the project and are awaiting the government green light to proceed with construction, according to an energy official.
The Pak Beng dam, to be located north of Luang Prabang in northwestern Laos’ Oudomxay province, was designed by Chinese developer Datang Overseas Investment Co., Ltd. through a memorandum of understanding between the Lao and Chinese governments signed in August 2007.
Construction on the project is only awaiting a nod from the government, a source from the Lao Ministry of Energy and Mining told RFA’s Lao service, speaking on condition of anonymity.
“It’s a Mekong dam. The design and everything else has been completed,” the source said.
“We’re just waiting for the government’s agreement to proceed.”

The dam will cost U.S. $1.88 billion to complete and generate 1,300 megawatts of energy when operable. The dam is estimated to be online by 2018 if the government allows construction to proceed.
If approved, the dam would be the second project of its kind on the Mekong River in Laos after the controversial Xayaburi dam, for which initial construction work had already begun despite opposition from environmentalists and neighboring nations.
Resource-starved Laos hopes to become the “battery” of Southeast Asia by selling hydroelectric power to its neighbors.
In September, Lao energy minister Soulivong Daravong said that the government would not shelve plans to build the U.S. $3.5 billion Xayaburi dam—the first of 11 proposed dams on the main stream of the Lower Mekong River.
Two months earlier, Lao Foreign Minister Thongloun Sisoulith announced at a meeting of the Association of Southeast Asian Nations (ASEAN) that the project had been put off pending further studies.
But official media in Laos has said the government would allow developer Ch. Karnchang, a Thai company, to proceed with “scheduled” activities at the construction site, including the resettlement of affected villagers.
The dam has drawn criticism from neighbors Cambodia and Vietnam, which have jointly urged Laos to suspend the project to allow more time for a comprehensive review.
In August, a group of Thai villagers opposed to the dam submitted a lawsuit against five Thai government agencies, saying the government should not have agreed to purchase electricity from the dam without further study.
The project is being financed by a consortium of Thai banks.
The Mekong River Commission (MRC), an intergovernmental body including Cambodia, Laos, Thailand, and Vietnam which manages development along Southeast Asia's main waterway, had also ruled that the dam project should not proceed until further assessment was conducted.
The decision followed an earlier recommendation by an expert study group for a 10-year moratorium on all mainstream Mekong dams due to a need for further research on their potentially catastrophic environmental and socioeconomic impact.

Posted by nhomlymha at 9:25 AM