Observed changes in flow regimes in the Mekong River basin

·        Human activities, such as dam construction, significantly altered the flow regimes in the Mekong River, particularly after the completion of two large dams, namely Xiaowan and Nuozhadu in 2010 and 2014, respectively. Stream flow data from 1960 to 2014 obtained from five stations located along the Mekong mainstream are divided into three periods, i.e., the pre-impact period (1960–1991), the transition period (1992–2009), and the post-impact period (2010–2014).
·        The construction and operation of dams clearly have significant impacts on low pulse duration. It is observed that climate change dictated the changes in the annual stream flow during the transition period 1992–2009 (82.28%), whereas human activities contributed more in the post-impact period 2010–2014 (61.88%). The results of this study could provide a reference for reservoir operation in the upstream regions considering both ecological and economic benefits of such operations, as well as maximize the interests of stakeholders in this region.

*   In river ecosystems, the flow regime of runoff plays a significant role in many fundamental ecological processes (Poff and Zimmerman, 2010). Changes in flow regimes within the context of climate change and human activities are significant to the hydrological community, receiving considerable global attention. Climate change and human activities have been considered as the two primary factors affecting flow regimes (Li et al., 2006 ;  Ma et al., 2014). In some basins, human activities are the main factors that alter flow regimes, particularly during the construction and operation of large reservoirs (Poff et al., 1997 ;  Fan et al., 2015). Climate change can also be the dominant factor that alters flow regimes (Li et al., 2006), which can change the pattern of precipitation and potential evaporation (Wang and Hejazi, 2011). Human activities, such as dam construction and water withdrawal activities (i.e., irrigation, industry, and municipal demands), directly change flow regimes (Ma et al., 2014), thereby changing river ecosystems (Gippel, 2001; Poff et al., 1997; Richter et al., 2003 ;  Richter et al., 2006). The impacts of the two factors are often analyzed separately. However, the effects of climate change and human activities are always combined, and their effects on some river basins are difficult to identify. For example, climate change may cause changes in precipitation, increasing the impacts caused by dams as more water would be regulated by reservoirs during the long dry seasons (Lu et al., 2014).
·        The Mekong River is the ninth largest river globally, and the Mekong River Basin (MRB) harbors one of the most productive and diverse ecosystems in South Asia (Kuenzer et al., 2013). Ecological issues in the MRB have been a major concern to stakeholders, researchers, and other professionals globally. Over 70 dams spread across six riparian countries make the management of this transboundary river quite complicated and sensitive. Several studies focused on the hydrological effects of hydropower dams on the Mekong River, particularly the dams in China.
·        Some researchers have argued that construction of all the 78 tributary dams would produce less energy and pose greater environmental risks as compared to having six mainstream dams upstream of the Mekong River (Ziv et al., 2012). Recently, Cochrane et al. (2014) analyzed the alteration in water levels in six stream flow gauging stations along the mainstream of the Mekong River from 1960 to 2010 and discussed the relationship between annual fluctuations and active reservoir storage. However, the two largest reservoirs built after 2010, Xiaowan and Nuozhadu, were not considered in the aforementioned study; hence, the impacts of these reservoirs remain largely unknown 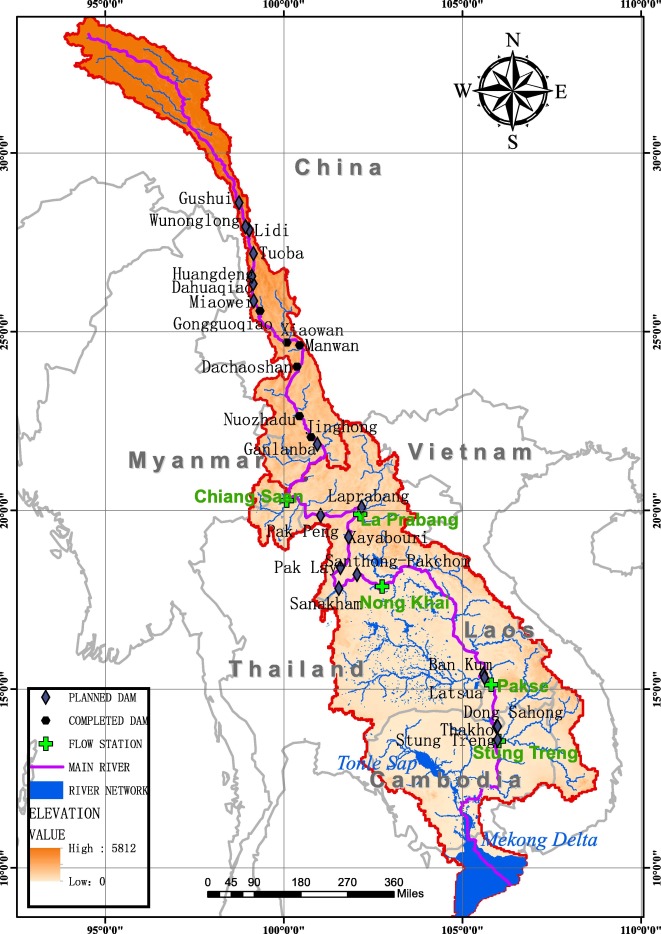 
Location of Mekong River Basin and the 6 completed dams and 19 planned dams
along the mainstream.

*      Downstream of the LMB, several important ecological sites closely related to the flow regimes of the river exist; among them, Lake Tonle Sap and the Mekong Delta are the most famous. Tonle Sap, which is the largest lake in Southeast Asia (covering an area of 8800 km2 on average) and connected with the mainstream of the Mekong River at Phnom Penh, Cambodia, is regarded as the “natural reservoir” of the MRB. The water flowing into Tonle Sap from the Mekong River during the wet season (June to October) is nearly six times than that during the dry season (November to May) (Cochrane et al., 2014). Tonle Sap is rich in aquatic products and contains more than 300 species of freshwater fish. The downstream area of Phnom Penh is called the Mekong Delta, the area of which is ∼55,000 km2 (4000 km2 in Vietnam; 11,000 km2 in Cambodia). The Mekong Delta is subjected to frequent drought and flood events and influenced by tidal and seawater intrusion, particularly during dry seasons (Zhang et al., 2001).

*     No dam was constructed on the mainstream of the Mekong River until 1992. China has built six hydropower dams on the mainstream of the Lancang River (i.e., the UMB) since 1992 (as shown in Table 2). The two largest dams are Xiaowan (14.56 km3 in total storage, completed in 2010) and Nuozhadu (22.4 km3 in total storage, completed in 2014), contributing to 36% and 55% of the total storage capacity of all the existing reservoirs in the basin, respectively. Although the streamflow regime has been altered because of large-scale dams, the hydropower generation of the Mekong River has kept increasing in recent years (MRC, 2010). In the subsequent decades, 19 dams were planned to be built on the mainstream of the Mekong River (8 in China, 10 in Laos, and 1 in Cambodia), and over 14 large dams (>10 MW) would be built in the tributaries. The primary objective of these dams is hydropower generation, which is expected to yield considerable economic benefits for the riparian countries. Moreover, the construction and operation of dams would improve navigation conditions, increase irrigation opportunities, and enhance flood control capacity (Lu et al., 2014). However, the construction and operation of large dams would also affect the patterns of streamflow, resulting in multiple changes in streamflow regimes, thereby causing a negative impact on ecosystems. The daily flow-time series data obtained from the Mekong River Commission (http://portal.mrcmekong.org/index) are used to explore these comprehensive changes in the streamflow regimes in this study.

*   Our large dams were constructed and completed after the year 2009, namely the Jinghong, Xiaowan, Gongguoqiao, and Nuozhadu (largest) Dams, which were completed in the years 2009, 2010, 2011, and 2014, respectively, with active storage capacities of 1.23 km3, 14.56 km3, 3.16 km3, and 22.4 km3, respectively. The completion of these dams significantly increased the RC values of Chiang Saen from 30 mm to 230 mm, whereas the initial filling of these dams reduced the annual streamflow in Chiang Saen located near the downstream region (Fig. 5a). However, gauging stations located farther downstream show a different trend because their distances from these dams are considerable (Fig. 5). The impacts of the dams gradually decreased, reflected by the fact that no clear trend is observed in Stung Treng station. This is because only approximately 16% of the streamflow in this station comes from the upstream dammed area in China, and the downstream hydrologic processes dominated the flow regime. Given that the effects of the reservoirs decrease from the upstream region to the downstream region, the focus of this study is to analyze the most influenced upstream station (Chiang Saen) and the least influenced downstream station (Stung Treng).
·        In addition to reservoir construction and operation, other factors may also affect the flow regimes (Cook et al., 2012)

*      The flow regimes have changed to some degree after the construction and operation of dams on the mainstream, particularly in the upstream, observed by several gauging stations during the transition period (1992–2009) and post-impact period (2010–2014). The mean flow and minimum flow increased in the dry seasons, while the mean flow and maximum flow decreased in the wet seasons. The low pulse duration significantly declined, and the number of fluctuations increased. The changes in the post-impact period are more severe than in the transition period.
·        The most important negative impact of these changes is the destruction of fish habitats (Ziv et al., 2012). Similar to many tropical rivers globally, fish ecosystems in the MRB are extremely fragile. Many important and unique fishes in the MRB are seasonally migratory fishes, and natural flow regimes and upstream shoals and rapids are very important for their breeding. These changes in flow regime also influence other river in ecosystems.

*   However, increased flow in the dry seasons can significantly benefit agricultural irrigation in the downstream areas. Water resources in the upper reach of the Mekong River are mostly used for power generation without water withdrawal. The five countries along the LMB are agricultural countries; the Chi-Mun basin has the largest irrigation system in the MRB. With growing population, water demand for food and irrigation markedly increased. Barker and Molle (2004) estimated that only 3% of the irrigated land in the basin was exploited in 2002. MRC (2011) reported that irrigated areas in the LMB countries would increase from 6.6 million ha in 2010 to 9.7 million ha in 2030.

*    Moreover, reduction in wet-season flow, but increase in dry-season flow due to the operation of the upstream dams are beneficial for downstream flood and drought management, navigation, and even the ecosystem in the Mekong Delta. For instance, on March 15 and April 10 of 2016, because of the extreme drought event in the Mekong Delta in Vietnam, the Chinese government released more than 2.7 billion m3 of stored water from the upstream Jinghong Reservoir to the Mekong Delta for agriculture and ecosystem demands. The discharge from the Jinghong Reservoir increased to 2000 m3/s, approximately twice the mean annual discharge or more than three times the natural discharge for the same period. This joint effort was a successful event for transboundary river management (MRC, 2016).

*     Both ecosystem and human demands in the MRB should be considered. Given that a large number of dams in the upper and lower reaches of the Mekong River are to be constructed in the near future, the impacts of human activities on streamflow would likely intensify, posing great challenges for river management. Moreover, given the uncertainty of climate change, collaborative and multi-objective management of these reservoirs are the keys to address both ecosystem and human demands; hence, environmental flow for ecosystem demands should be incorporated into reservoir operation objectives in the MRB.

*     This study used long-term daily streamflow observations in five gauging stations along the mainstream of the Mekong River to examine changes and trends in the IHA and eco-flow metrics (eco-surplus and eco-deficit). The results show that damming in the upstream area led to a declining trend in the annual streamflow in the upstream Chiang Saen gauging station, whereas no clear effect on the downstream Stung Treng station was observed. The operation of the dams reduces streamflow in the wet seasons, but increases the streamflow in the dry seasons, resulting in unique seasonal variations in the streamflow based on the eco-flow metrics at Chiang Saen during the period 2010–2014.

*     During the transition period 1992–2009, climate change contributed to 82.29% of the total streamflow change, whereas human activities contributed to 62% of the total change during the post-impact period 2010–2015. It is shown that only 0.57% of the land use in the MRB changed during 2000–2010, implying that the land-use change was not a significant factor among human activities.

Posted by nhomlymha at 8:50 PM