Overview: The Three Gorges Dam site is 27 miles upstream from Yichang City proper, at Sandouping Town, 38km upstream from the Gezhouba Dam Lock, inside the third of the Three Gorges. It is planned to be by far the largest hydroelectric project in the world. The Project calls for the construction of a concrete dam, a hydroelectric power plant and a series of locks just below the scenic Three Gorges region.
The project is designed to be built in three phases and was scheduled for completion in year 2009. Upon arrival at Sandouping, passengers will take a bus across the Three Gorges Bridge, which leads toward the top of Three Gorges Project the hill for a birds-eye view of the construction from the observation deck…

Where is Three Gorges Dam

The Three Gorges Dam situated at the upstream of Sandouping, Yichang, Hubei peovince, 38km away from the Gezhou Dam at the downstream. Three Gorges dam has broken the world record for annual hydroelectric power production.

What is the Dam Site?
The dam site is at Sandouping, Yichang City, Hubei province. The total catchment area is about 1,000,000 square meters and there is 451,000,000,000 cubic meters of average annual runoff.
At the location of the Sandouping dam site, the river valley is relatively open and broad, with a small islet known as Zhoubaodao in the river, which is favorable for a river diversion scheme with phased construction. details>> 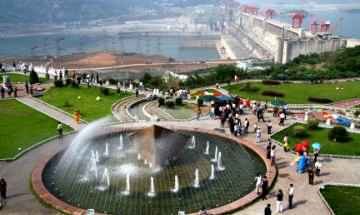 Why Built the Three Gorges Dam
The Three Gorges Dam is the world’s largest power producing facility, and the world’s largest hydroelectric dam. There were many reasons for building the dam due to its history and other causes. This article will investigate some of these.
The Three gorges dam was built across the Yangtze River to control the amount of water allowed through. This created a massive artificial lake which has become an international tourist attraction. The construction of a dam on the Yangtze River had been considered since 1919, but the Civil war and Cultural Revolution delayed the project until fairly recently.

One of the main reasons that the Three Gorges dam was built was to prevent flooding further downstream. The need for a dam was highlighted in 1954 when people were killed as a result of flooding of the Yangtze River.

The dam has been designed to impact the environment as little as possible. It has meant that some ancient artifacts were lost, or are no longer accessible. However, it is stated that the impact on the environment is very small.

The Dam isn’t just designed to save lives and generate electricity, but it is also a very popular tourist attraction. As it is the world’s largest hydroelectric dam it attracts thousands of tourists every year. 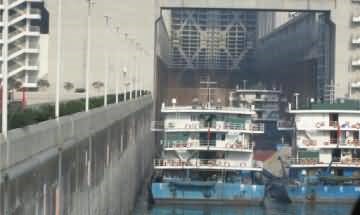 Schedule of the Dam
The Three Gorges Dam Project, which is the world largest water and power project, was kicked off on December 14,1994. The total construction period will be 17 years.

Sandouping, 7 km from the entrance of Xiling Gorge at the lower reaches of the Yangtze River, was selected as the site of the Three Gorges Dam in 1959. The river here is much bigger than it is in other area. There is a small island named Zhongbaodao in the middle of this part of the river. It is the best choice of the site for the dam.

The planning of the project was started in 1993. The actual building of the Dam started on 14 Dec. 1994. ZhongbaoIsland was used to build dyke A to dam the river water and to connect the right bank with the other dyke. In order to build the main part of the Dam and the diversion channel afterwards, foundation work B and foundation work C which is long and thin were built in the dry riverbed. At the same time, channel construction such as Lock D started. 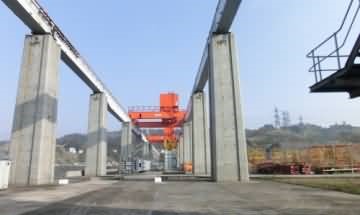 The Main Aspect of the Dam

The Three Gorges Project is designed with a concrete gravity dam with a crest elevation of 185 meters and maximum height of 175 meters. The dam axis runs 2, 309. 47 meters long, which is even longer than the noted Grand Coulee Dam of US.
The 483-meter spillway, located in the middle of the main dam, has 23 bottom outlets dimensioned at 79 meters. Each of its 22 surface sluice gates measures 8 meters wide. The maximum discharge capacity of the TGP is 116,000 cubic meters, the biggest in the world.

Two powerhouses, flanking the spillway, accommodate altogether 26 sets of turbine-generators. As the world's biggest unit ever made, each has a generating capacity of 700MW. The 643.6-meter-long left powerhouse, 60 meters longer than the 584.2-meter-long right one, houses 14 sets of generators. With all these huge generators, the TGP is designed to generate electricity of 84.7 TW/h. 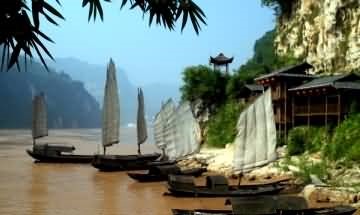 Impacts of the Dam

Landscape and Cultural Heritage: After the impoundment of the reservoir, higher water level and wider channel would change the scenery of the canyon to a certain extent' The elevations of mountains and peaks along the banks in the gorges range from 800 to 1, 100 m in nature. The elevations of the famous 12 peaks in Wuxi a Gorge are around 1,000 m. The most reputed Goddess Peak is more than 900 m above sea level. The normal pool level of the reservoir at 175 m will result in an increase of 40 to 110 m higher in the Gorges than at present. So the steep canyon enclosing the river valley will be basically untouched, even though the rapids and dangerous shoals will be eliminated. Better navigation condition will provide access to new scenic views, for instance, the Lesser Three Gorges" along the Daning River' The magnificent Three Gorges Project shall certainly become a new hot spot of tourism.

Environment: Dam defenders point to the environmental benefits given by the dam, such as the availability of hydroelectric power, which is much cleaner than the coal burning China has relied heavily for decades. They believe the dam will reduce greenhouse gas emissions by reducing coal burning (thereby protecting the ozone layer) and have none of the radiation hazards at nuclear plants. 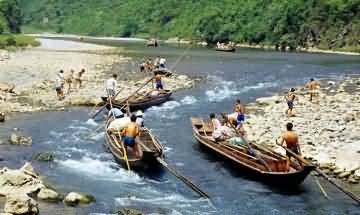 The World Records of the Three Gorges Project

The total storage capacity of the reservoir is 39.3 billion m3 ,of which 22.15 m3 is for flood control. After the completion of the TGP,The flood -discharging capacity of the Yangtze river would be 27,000 to 33,000 m3 /s,thus the floods from the upstream reaches of the Yangtze River could be controlled and the middle and lower reaches of the river,especially in Jinjiang reaches could be regulated or relieved.

The total installed capacity of the Three Gorges Hydropower Station is 18,200 MW with an annual electricity output of 84.68 billion KW/h.

The total length of the dam axis is 2309.37 meters. The spillway section, which is located in the middle of the river course,is 483 meters long in total.There are 26 sets of turbine generator units in total, 700 MW for each.The shiplock is schemed out as a double-way and five-step lock.It is the world's largest water conservancy project with the world's largest project building scale.

Posted by nhomlymha at 2:05 PM