DAMMING THE MEKONG The Myth of Sustainable Hydropower 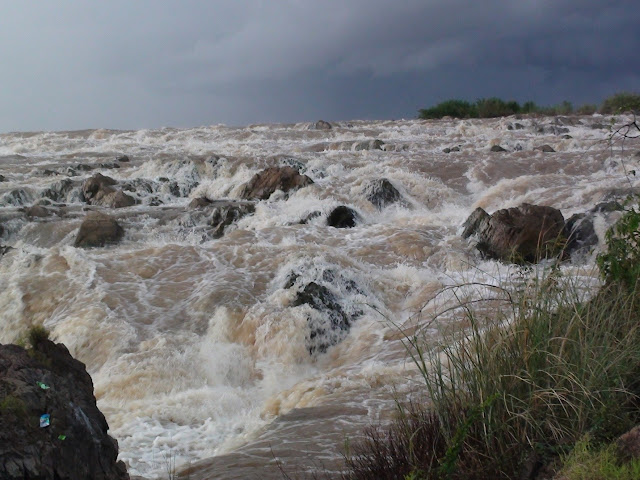 Explorers, travelers and traders have long been enchanted by the magical vistas and extraordinary biodiversity of the Mekong flowing through six countries, from the mountains of Tibet to the delta in Vietnam.
However the voracious demands of an energy-hungry region have led to a headlong rush into hydropower and a simmering conflict over the vitally important water resources of this great international river.
The current plans for a cascade of 11 dams on the main stream of the Lower Mekong is a recipe for killing the turbulent spirit of the mighty Mekong, taming its waters and the wonders of nature in the obsessive pursuit of energy at all costs.
The supporters of large dams argue hydropower is an allegedly ‘clean efficient source for of energy.’ They further claim that dams stimulate economic growth and promote development.
However the opposition to all dam projects on the mainstream Mekong, starts with the rural communities along the Mekong and its river basin supporting a 60 million population. The dam developers and government technocrats have failed to examine and study the hidden costs of hydropower, and the irreversible destruction of a unique ecosystem.
A wide-spectrum of critics points to well-documented list of negative impacts: the reduction of water flow and sediment, the huge loss of fisheries, the reduction of food security, and the increasing salinization-intrusion of sea water in the delta, to name but a few serious impacts which run counter to any narrative that dams automatically bring economic progress and “development.”
2016 will be a decisive year for hydropower projects on the mainstream Mekong. The first dam on the Lower Mekong –the Xayaburi Dam is now 60% built. The Don Sahong dam in southern Lao has just been launched, in January this year and a third dam the Pak Beng is being prepared.

Can hydropower on a mainstream river be sustainable?
The unilateral launch of the Xayaburi dam in 2012 and now the Don Sahong dam – second dam on the mainstream of the Mekong, is turning the river away from the historical vision of an international river of cooperation and friendship between Laos, Cambodia, Thailand and Vietnam, and into another conflict zone over the sharing of water resources.
However the government of Laos is not under any pressure from any of the bodies that ought to be grievously concerned: UN agencies like UNEP and FAO .The World Bank, WLE (Water, Land and Ecosystems, a CGIAR consultancy group); the USAID-sponsored Mekong Partnership for the Environment (MPE); nor other bodies that adhere to the mantra of ‘sustainable hydropower’ and environmental protection.
This term identifies a discourse that argues a well-mitigated ‘nice dam’ does not inflict too much damage on the ecosystem. It is a position that offers great comfort and solace to dam developers, investors and banks under fire from environmentalists and scientists.
Within this cluster of concern about water governance and claims to protect the environment of the 4,880 kilometres long Mekong, there is a grand silence by the donor nations and international bodies that greets the decline of the region’s longest river and the launch of yet another dam.
A regional coordinator for the WLE program has argued the case for ‘sustainable hydropower’ and trade-offs.
“We all enjoy the benefits that come with electric lighting, household appliances”, says Kim Geheb, WLE. “But how do we do this without affecting food production and the health of the environment? How do we ensure that rapid, large-scale dam development is fair and equitable? Answers to these questions are at the heart of what constitutes a ‘good’ dam.”

The two dams launched so far on the Lower Mekong in Laos surely do not appear to fulfill any obvious criteria for the sustainability principle of what constitutes a ‘good dam. ‘The Xayaburi and the Don Sahong dams along the Mekong are neither fair nor equitable, for the overwhelming majority of poor farming communities living downstream from these dams. These two dams both lack credible environmental impact assessments (EIAs), have failed to provide any trans-boundary studies, and have been launched in defiance of wide-ranging protest and riparian objections.
Scientific consultants to WWF (The World –Wide Fund for Nature) have issued a number of reports exposing massive flaws in these two projects and the lack of credibility of their assurances of effective fish mitigation.
Latest data published by Catch and Culture MRC’s fisheries publication shows that threat posed to the Mekong is based on hidden economic costs that will occur the Mekong is dammed.
The Mekong is a very special river hosting the world’s largest inland fisheries valued at $11 billion ($11 billion for wild capture but that total figure is $17 billion if fish farms along the Mekong are included.) It ranks with the Amazon for the extraordinary diversity of fish species at around 1000 and scientists are still counting. 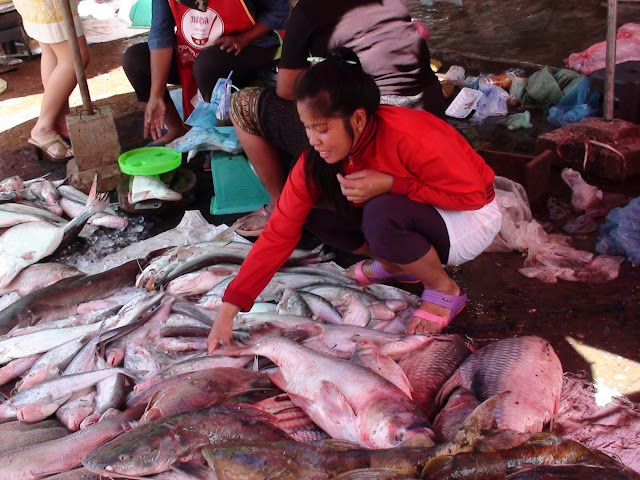 PAKSE FISH MARKET – A TYPICAL RAINY SEASON CATCH FROM SIPANGDON (4 THOUSAND ISLANDS). THIS GREAT SOURCE OF FOOD SECURITY IN SOUTHERN LAOS COULD SOON BE CUT BACK BY THE DISRUPTION OF FISH MIGRATION BY THE CONSTRUCTION OF THE DAM THAT WILL BLOCK THE MAIN FISH ROUTE FROM DOWNSTREAM CAMBODIA TO LAO
(credit Tom Fawthrop)

Estimated fisheries contributed $2.8 billion to Cambodia’s economy in 2015. That’s a big chunk of Cambodia’s $16.71 billion GDP. These catches for wild-capture fisheries are directly under threat from hydro-electric dams.
Studies have shown that the projected loss of fisheries, crops and biodiversity caused by dams will result in a staggeringly high deficit, compared to the modest benefits from increased energy and electricity. The 2015 study calculates the Mekong net loss at minus $2.4 billion (for 6 dams) and up to minus $21.8 billion if all eleven dams are built on the mainstream according to a study published by Chiang Rai University
The science shows that it does not even make good economic sense to build more large dams, in a river blessed by such amazing ecological wealth.

The mitigation game fools no one
Sustainable hydropower and its concern to minimize harm to the environment relies heavily on mitigation technology, including such devices as fish passage, fish ladders and even so-called ‘fish-friendly’ turbines.
Christy Owen, party leader of the MPE (The US-Aid backed Mekong Partnership for Environment) explained at a recent forum: “This work can help ensure that new development projects meet the needs of business, while minimizing harm to local communities and the environment.”
Her statement assumes that no matter the high stakes, and the calamitous effects of ‘bad dams’, dams are somehow “destined to go ahead” after a measure of mitigation and refinement
Fish mitigation technology has mostly been applied and tested in northern climes – the rivers of North America, and parts of northern Europe. Importing this technology to the Mekong and other tropical rivers teeming with a vastly greater variety of fish species than in the rivers of colder countries, is seen by most fisheries experts as highly risky at best. 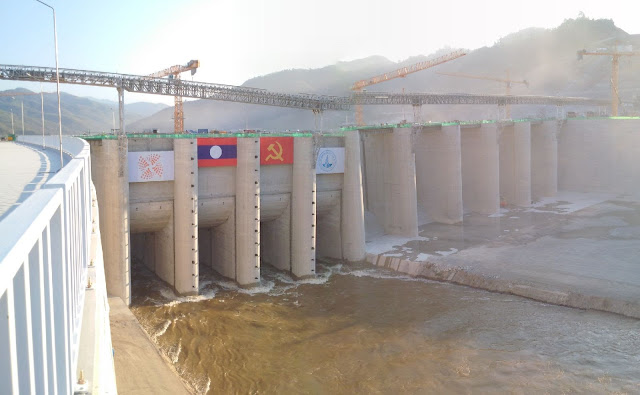 THE XAYABURI DAM CONSTRUCTION 2015– THE FIRST HYDROPOWER PROJECT TO BE BUILT ON THE LOWER MEKONG. PRESSURE FROM CRITICS OF THE DAM – NGOS SCIENTISTS AND THE GOVERNMENTS OF CAMBODIA & VIETNAM- THE THAI DEVELOPER AND THEIR ZURICH-BASED CONSULTANTS ADOPTED FISH MITIGATION TECHNOLOGY BASED ON EXPERIENCE IN NORTHERN EUROPE AND SWTZRLAND.  (pic International Rivers)

What may work in the rivers of North America, Norway and Switzerland cannot be mechanically transferred to the vastly more diverse fish species and ecology of the Amazon and the Mekong.
Hydropower consultant working with WWF Dr. Jian-Hua Meng views the mitigation carried out by Swiss consultants on the Xayaburi dam as a huge gamble with the river’s natural resources. “They are playing roulette with the livelihoods of over 60 million people. It would not be acceptable in Europe, so why is it different in Asia?” [1]
The mitigation team employed by Mega-First, the Malaysian developer of the Don Sahong dam, has been engineering fish diversion channels so that fish will change their centuries- old route along the Sahong channel which will be totally blocked by the building of the Don Sahong Dam. 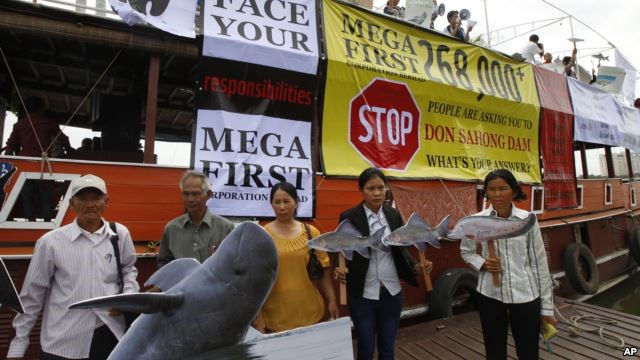 NGO mobilization in Thailand against the Don Sahong Dam.

However the MRC panel of experts found no evidence that this engineering project would guarantee the protection of large quantities of migratory fish of many different species by offering an untested alternative migration route to bypass the traditional channel according to MRC fisheries expert Dr So Nam (Pakse MRC technical review of experts December 2014).
Mekong specialist Dr. Philip Hirsch, based at University of Sydney shared with this correspondent “After 30 years of studying dam impacts, I have yet to come across one [dam], whose impacts have been well-mitigated. Let’s start with dams that are already there, before using ‘anticipated mitigation’ as a pretext for going ahead with new projects.”

The evidence is clear: there is nothing sustainable about large dams
A widely cited Oxford University study, published in the journal Energy Policy in March 2014, reviewed data from 245 large dams in 65 different countries, and concluded that large dams in general are not sustainable.
As the authors wrote in a statement attached to the study: “The evidence is conclusive: Large dams in a vast majority of cases are not economically viable. Instead of obtaining hoped-for riches, emerging economies risk drowning their fragile economies in debt, owing to ill-advised construction of large dams.”
The global governance debate has clearly shifted business towards paying more attention to environmental protection issues, but all too often this is more a concern to improve their corporate image and improving their public relations, rather than a genuine will rethink their on-going strategy for damming the Mekong.
From his decades of research in the Mekong region Dr Philip Hirsch concludes: “The impacts of some dams are just too great to mitigate.”
WWF warns that hydropower does not mitigate of climate change. But with the Mekong under threat from an annual decline in water flow from the melting glaciers in Tibet, it can on the contrary exacerbate and drive climate change.
The evidence is steadily mounting that if we allow the Mekong to be comprehensively dammed, climate change will grow worse with increasing droughts and salinization from the ocean. The region will then be saddled with a ruined Mekong and the riparian peoples will be damned into around 20 years time to the tragic and irreversible legacy of unsustainable hydropower.
The only way to save the Mekong is by pushing for regional countries and the wider world to understand the ecological wealth and the real economic value of great rivers like the Amazon and the Mekong.

References:
Strategic Environmental Assessment of Mainstream Dams …
www.mrcmekong.org › … › Initiative on Sustainable Hydropower The SEA presents trans-boundary impacts of the proposed mainstream … As with any commissioned study, the SEA report is not an official MRC approved document.
2) Mekong communities seek injunction on Xayaburi Dam deal …
www.nationmultimedia.com › national
Oct 16, 2014 – … River yesterday lodged a petition with the Administrative Court in Bangkok, … Court on June 24 to accept the network’s right to bring a lawsuit
Catch & Culture Vol. 21, No. 3 » Mekong River Commission
www.mrcmekong.org › News & Events › Newsletters
Jan 5, 2016 – Lower Mekong fisheries estimated to be worth around $17 billion a year … Catch and Culture is published three times a year by the office of the Mekong River … are available through the MRC website,www.mrcmekong.org
The 2015 study calculates the Mekong net loss at minus $2.4 billion ( for 6 dams) and up to -21.8 $billion ( for 11 dams)
Energy Policy
Volume 69, June 2014, Pages 43–56  Oxford Univesity study on the impacts of large dams .The study is based on data from 245 large dams in 65 different countries.
Should we build more large dams? The actual costs of hydropower megaproject development
http://www.bsg.ox.ac.uk/news/should-we-build-more-large-dams
Latest research pubished in 2015 by Chiang Rai University Mekong research group http://www.mfu.ac.th/nremc/content_detail.php?id=298

Contact the author:
Tom Fawthrop
director of THE GREAT GAMBLE ON THE MEKONG  EUREKA FILMS 2015

Posted by nhomlymha at 1:10 PM