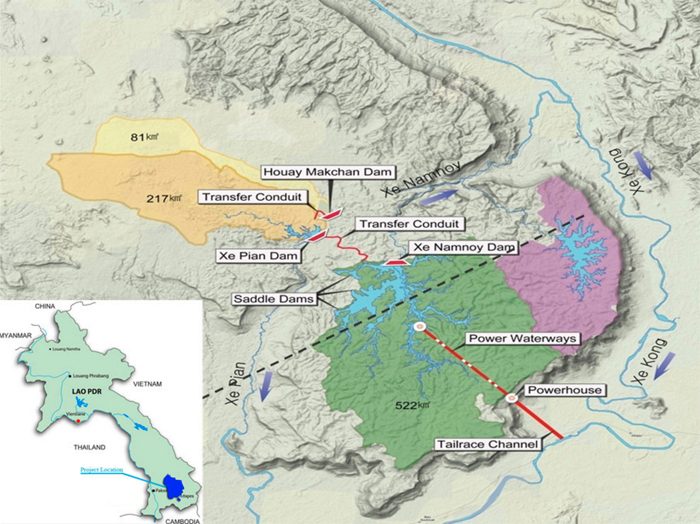 By Gregory B. Poindexter
Associate Editor

Xe-Pian and Xe-Namnoy are rockfill dams will be constructed on the Bolaven plateau, along with saddle dams and Houay Makchan Dam, while the powerhouse will be located at the plateau base, giving the scheme a head of more than 630 m. Water will be discharged to the Xe Kong River.

About 20% complete, developers think the project will annually generate about 1,860 GWh once it begins generating energy. The feasibility study for the project was completed in November 2008, construction began in February 2013 and commercial operations are expected to begin in 2019.

Xe-Pian Xe-Namnoy (also spelled Xae Pien-Xae Nam Noi and other variations) is located in Attapeu and Champasak provinces near the border with Thailand. It is about 80 km east of Pakse on the Mekong River and 35 km northwest of Attapeu, approximately 550 km southeast of Vientiane, the capital city of Laos, in the country’s southern region.

The scheme will also have a storage reservoir on the Xe Namnoy River, underground tunnels, shaft waterways, and a powerhouse that features three Francis and one Pelton turbine.
PNPC is a joint-venture formed in March 2012 by SK Engineering and Construction (SK E&C), Korea Western Power (KOWEPO), Ratchaburi Electricity Generating Holding (RATCH), and Lao Holding State Enterprise (LHSE).
SK E&C holds 24% stake in PNPC, LHSE 26%, and RATCH and KOWEPO each own a 25% share in the project.

Posted by nhomlymha at 8:33 AM