The accident in Laos is said to have released five billion cubic metres of water - more than two million Olympic swimming pools. 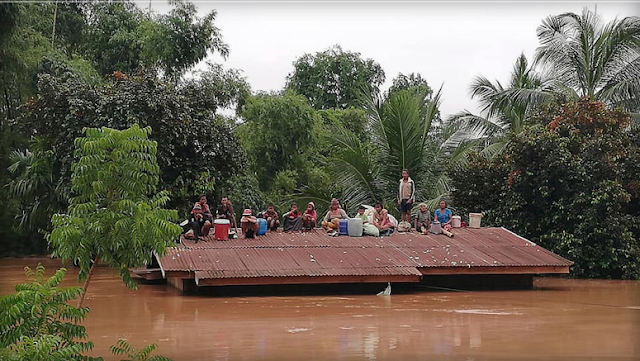 Image:
Villagers stranded on the roof of a house after the Xe Pian Xe Nam Noy dam collapse in Laos
By Alan McGuinness, news reporter

Hundreds of people are missing and an unknown number feared dead in Laos after a hydropower dam under construction collapsed.
Laos News Agency reports that the accident in the southeastern province of Attapeu has released five billion cubic mettres of water, enough to fill more than two million Olympic swimming pools.
Boats have been brought in to help evacuate people as water levels rise, according to ABC Laos news, with reports the flash flooding has left more than 6,000 people homeless in six villages in the southeast Asian country.
A video posted on the network's Facebook page shows villagers watching the fast-flowing water from the side of a river bank.

The portion of the dam that collapsed on Monday is reported to be a "saddle dam", an auxiliary structure used to hold water beyond what is held by the main dam.
A spokesman for the one of the companies involved in the project said heavy rain and flooding caused the collapse. He said the firm was co-operating with the government to rescue villagers.
"We do not have any formal information yet about any casualties or how many are missing," an Attapeu official told the AFP news agency on condition of anonymity, adding there was "no phone signal" in the region.
"We sent rescue teams who will help them and provide basic assistance first," they added.
The $1.2bn (£915m) dam is part of a project by Xe Pian-Xe Namnoy Power Company, a joint venture which is also known as PNPC.
A number of companies are involved, including Thailand's Ratchaburi Electricity Generating Holding, South Korea's Korea Western Power and the state-run Lao Holding State Enterprise.
The 410 megawatt capacity dam, close to Laos' border with Cambodia, was meant to begin commercial operations by 2019.

It was to form part of a series of dams over the Houay Makchanh, the Xe-Namnoy and the Xe-Pian rivers in neighbouring Champasack province.
The plan was to export 90% of the electricity generated to Thailand, with the rest offered up on the local grid.
Environmental groups have long voiced fears about impoverished and landlocked Laos' hydropower ambitions, with around 10 dams in operation, another 10 to 20 under construction and dozens more in the planning stages.
In particular, concerns have been raised about the impact on the Mekong River, its flora and fauna and the communities that depend on it for their livelihoods.
As well as disquiet within Laos, several neighbouring nations are worried Laos' ambition to become the "battery of southeast Asia" will disrupt vital ecosystems and their own river systems.

Posted by nhomlymha at 7:53 AM