SOURCE AND TRANSPORT OF ARSENIC IN THE MEKONG DELTA’S AQUIFERS 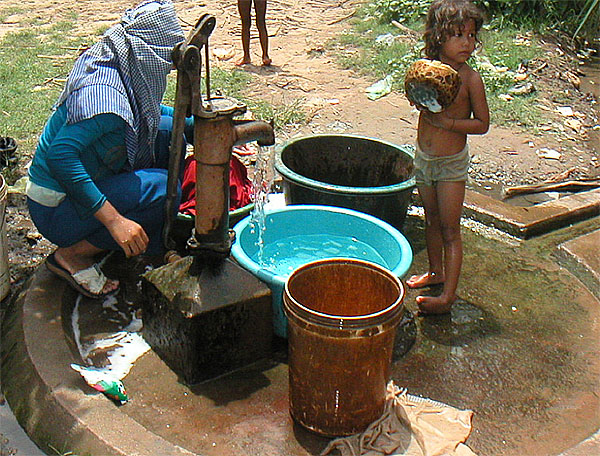 Arsenic in groundwater is considered as a thread to human health, affecting approximately 137 million people in 70 countries [1].  In the Mekong delta – including the floodplains in Cambodia and Vietnam – arsenic is found in the alluvia deposited by sediments carried downstream from the Himalayas in form of iron oxides.  From there, arsenic is released into groundwater through microbial reduction and chemical dissolution [2].  Arsenic with elevated concentrations is detected in the Holocene Alluvium and Pleistocene Alluvium in the deltas across South and Southeast Asia in India [3], Nepal, West Bengal, Bangladesh, Cambodia and Vietnam (in the Red delta in the North and the Mekong delta in the South (MD/V)) [4].  In the MD/V, besides the shallow Holocene and Pleistocene aquifers, arsenic with high concentrations is also found in the deep Pliocene and Miocene aquifers.

Geology and hydrogeology of the MDV

The presence of arsenic in groundwater in the deep aquifers in the MD/V depends on the geology and hydrogeology of the region.  Groundwater cannot flow through the impermeable clay layers, but it can flow easily in the permeable sand layers or aquifers under a difference in hydraulic heads or pressure. 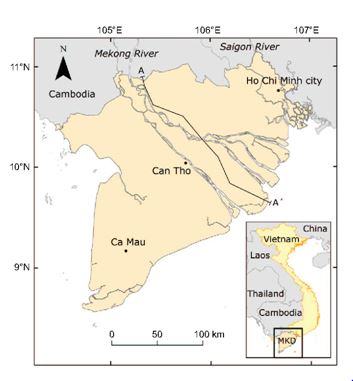 Figure 1: The Mekong delta in Vietnam [5] 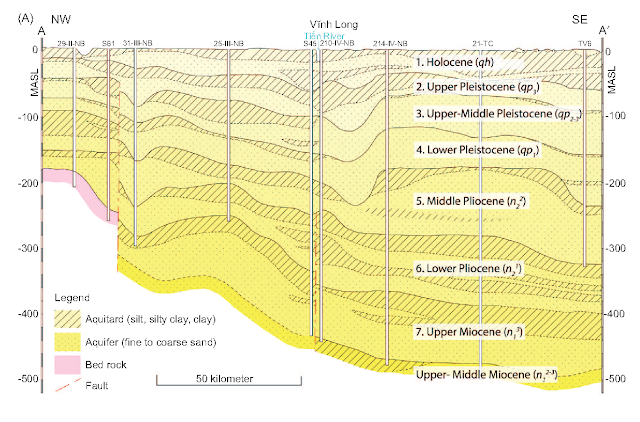 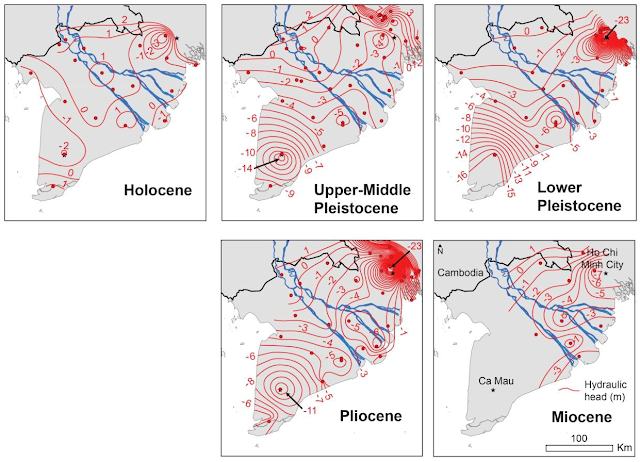 Figure 3: Groundwater levels in the MD/V [4] 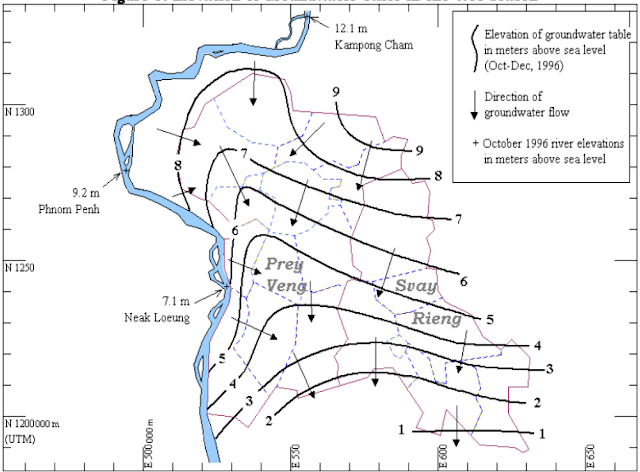 Figure 4: Groundwater levels in the Mekong delta in Cambodia (MD/C) [6]

Scientists had long confirmed that arsenic, in the deltas across South and Southeast Asia, originates from arsenic-laden rocks in the Himalayas carried downstream by the rivers in the region.  However, the presence of arsenic in the deep aquifers remains a mystery.

In order to unveil this mystery, Dr. Scott Fendorf, a professor of environmental Earth system science and a senior fellow at Stanford University's Woods Institute for the Environment, and two colleagues, Chris Francis, an assistant professor of geological and environmental sciences, and Karen Seto, now at Yale University, launched a field study in Asia in 2004.  They began their investigation in the Brahmaputra River delta in Bangladesh, but the groundwater flow there is highly influenced by irrigation wells; therefore, they moved their work to the MD/C, which was chemically, biologically and geologically similar to Bangladesh but mostly undeveloped, as shown in Figure 5. 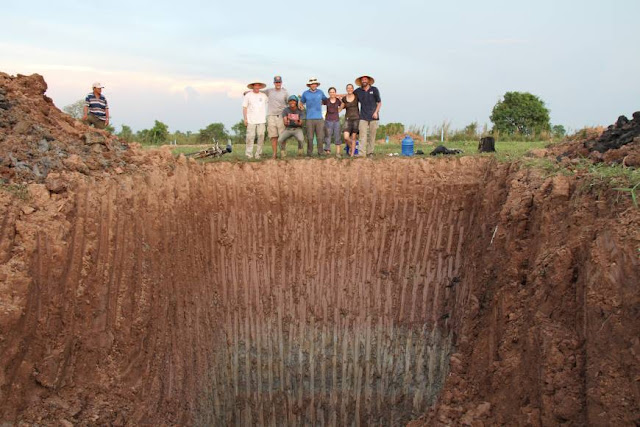 In 2009, they concluded that arsenic in sediments transported down by the Mekong river from the Himalayas was released within the first 2 to 3 feet (less than 1 m) bgs and entered the water.  They estimated that it would take at least 100 years to migrate down into the aquifers below.  They also showed that the 100-year migration of arsenic into the deep aquifers was a natural process that had been occurring for thousands of years. [7]

Although the Fendorf findings are consistent with current understanding of the source of arsenic in the Mekong delta, they contradict with the principles of hydrogeology when stating that arsenic in water migrates down into deep aquifers across the clay layers.  This cannot happen because the deep aquifers are confined with very high pressures.

In 2013, in her “Dissertation Submitted to the Department of Environmental Earth System Science and the Committee on Graduate Studies of Stanford University in Partial Fulfillment of the Requirements for the Degree of Doctor of Philosophy” [8], Dr. Laura Erban used a three-dimensional model to prove that “when low-arsenic, deep aquifers were over-pumped during recent decades, clay compaction began, leading to water containing arsenic and possibly other, arsenic-mobilizing solutes being squeezed out of dead-flow storage to adjacent aquifers, a process taking a decade or more.”  This hypothesis was also presented in the Proceedings of the National of Academy of Sciences of the United States of America (PNAS) in the same year [4]. 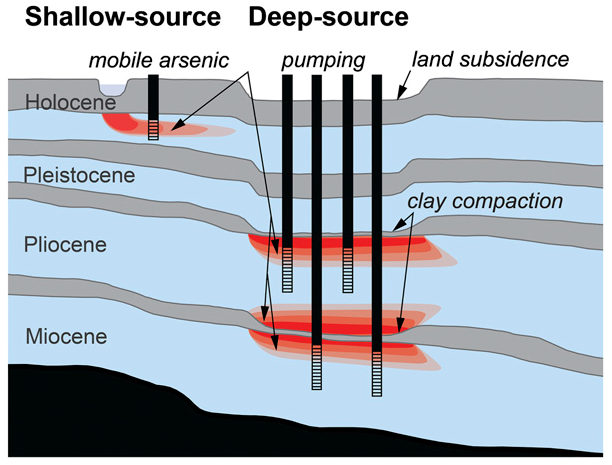 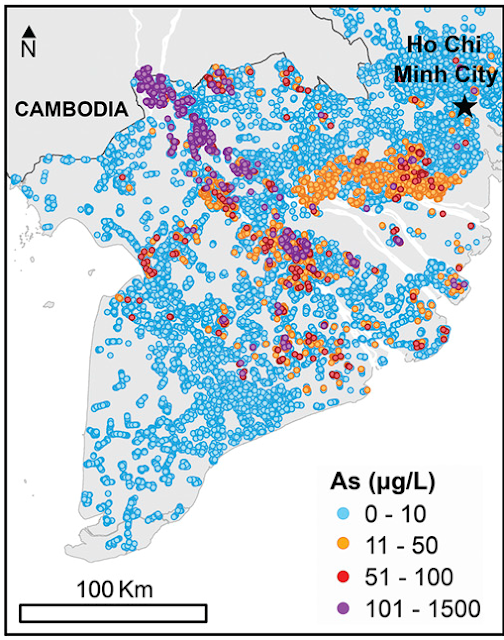 According to available data, groundwater contaminated with high concentration of arsenic in the MD/V is common along the Mekong river between the border and the city of Can Tho.  As shown in Figure 7, wells with arsenic concentrations above 100 µg/l are not located within areas of large land subsidence rate, as shown in Figure 8.  Therefore, the Erban hypothesis does not seem scientifically justified. 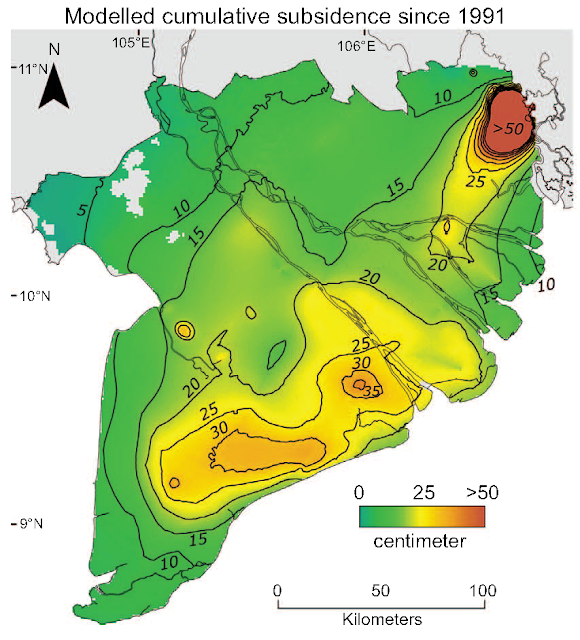 Another shortcoming of the Erban hypothesis relates to the amount and concentration of “arsenic-mobilizing solutes of dead-flow storage” in the clay layers that were squeezed out into the deep aquifer.

Since the effective porosity of the clay layers is very small, these clay layers cannot contain enough water with high arsenic concentrations to contaminate the adjacent aquifers, if it is squeezed out of the clay.

Based on the geological structure and hydrogeological conditions, as mentioned above, together with the arsenic concentrations in the MD/C, as shown in Figure 9 - with arsenic concentrations in some wells may reach 6,000 µg/l [9] - it can be concluded that arsenic in the deep Pliocene and Miocene aquifers in the MD/V originates from the shallow Holocene aquifer in the MD/C.  From there, arsenic migrates down into the Pliocene and Miocene aquifers and then toward the MD/V. 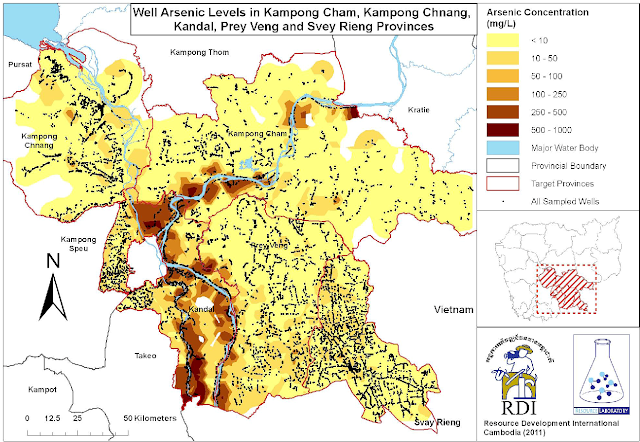 Figure 9: Arsenic in the Mekong delta in Cambodia [6]

If the deep Pliocene and Miocene aquifers have an average hydraulic conductivity or permeability) K = 3.15x10-4 m/sec (9.934 km/yr) [10], an effective porosity Θ = 0.17 [8] and an average hydraulic head along the Mekong river from Phnom Penh, Cambodia to Can Tho, Vietnam i = 2.1x10-3 (a difference in elevations of 400 m in a distance of 190 km measured on Google Map); the average velocity of groundwater in the deep Pliocene and Miocene aquifers is approximately 123 m/yr (v = Ki/Θ).  As a result, arsenic would take about 2,000 years to reach groundwater in the deep aquifers underneath Can Tho.

Arsenic-laden rocks from the Himalayas were carried downstream by sediments in the Mekong river and deposited in the delta alluvia.  Arsenic with elevated concentrations is found in the Holocene and Pleistocene aquifers in the deltas across South and Southeast Asia.  In part of the Mekong delta in Vietnam, arsenic is also found in the deep Pliocene and Miocene aquifers and remains a “mystery” until the 2000s.

To unveil this mystery, the scientists from Stanford University conducted a field study in Cambodia in 2004.  They concluded that arsenic in the sediments from the Himalayas was released to the water within the first 2 to 3 feet below ground surface and took at least 100 years to migrate down into the aquifers below.  This finding contradicts with the principles of hydrogeology because water cannot migrate across the clay layers into the deep aquifers under confined conditions with very high pressures.

The presence of arsenic in the deep Pliocene and Miocene aquifers was also thought to be squeezed out of the interbedded clay layers, due to land subsidence resulting from decades of groundwater extraction.  However, this hypothesis is not supported by scientific evidence.