- Results: endangered biodiversity and food supply for at least 60 million people in the region, worst drought, more and more landslides and salivation of agricultural land downstream, in the Mekong sub-basin...

BAN NONG CHAN, Thailand (Reuters) - By this time of year, the Mekong River should have been rising steadily with the monsoon rains, bringing fishermen a bounty of fat fish.
Instead, the river water in Thailand has fallen further than anyone can remember and the only fish are tiny.
Scientists and people living along the river fear the impact of the worst drought in years has been exacerbated by upstream dams raising the prospect of irreversible change on the river that supports one of Southeast Asia’s most important rice-growing regions.

A Chinese promise to release more dam water to ease the crisis has only raised worries over the extent to which the river’s natural cycles - and the communities that have depended on it for generations - have been forever disrupted.
“Now China is completely in control of the water,” said Premrudee Deoruong of Laos Dam Investment Monitor, an environmental group.
“From now on, the concern is that the water will be controlled by the dam builders.”

In the northeastern Thai province of Nakhon Phanom, where the now sluggish river forms the border with Laos, the measured depth of the Mekong fell below 1.5 meters this week. The average depth there for the same time of year is 8 meters.
“What I have seen this year has never happened before,” said Sun Prompakdee, who has been fishing from Ban Nong Chan village for most of his 60 years. “Now we only get small fish, there are no big fish when the water is this low.”
The collapse in the water level is partly due to drought - with rainfall during the past 60 days more than 40 percent below normal for the time of year.

But it is also because dams upstream cut off water just when it was most needed. China’s Jinghong hydropower station said in early July it was more than halving the flow rate for “grid maintenance” on what China calls the Lancang River.
Then the new Xayaburi dam, being built by a Thai company in Laos to provide power for Thailand, began test runs on July 15.
“It’s indicative of the difficulties of launching and operating mega projects in a system that is susceptible to wild swings in its seasonality as well as moving into a period in which climate change impacts are settling in,” said researcher Brian Eyler, author of “Last Days of the Mighty Mekong”.
It is just the kind of nightmare feared by the countries downstream - Thailand, Laos, Cambodia and Vietnam - where tens of millions of people rely on a river that gave rise to the region’s ancient kingdoms.
Facing water shortages in cities and fields, Thailand has told farmers to stop planting more rice.
Thailand’s foreign ministry told Reuters it had invited in the Chinese ambassador “to discuss ways to resolve the Mekong crisis regarding climate change and drought”.

China’s embassy did not respond to a request for comment on the meeting or the water shortage. Just two weeks before the crisis, the embassy released a statement promising China’s care for a river it said “embodies a natural bond of mutual support”.
In Beijing, Chinese foreign ministry spokeswoman Hua Chunying said: “I know that China has been in close contact with countries in the Greater Mekong Subregion, regarding cooperation on the Mekong River.”
Thailand also asked Laos to open the Xayaburi dam.

Both China and Laos had agreed to release water to address the immediate water shortage, the Thai foreign ministry said. Since then, the water level at Nakhon Phanom has started to rise.
But environmentalists said the sudden water shortage was a warning sign for the future of the Mekong and its flora and fauna, including the endangered Giant Catfish.
China’s 11 Mekong dams with the capacity to generate more than 21,300 MW of electricity dwarf those of its neighbors.
Another 8 dams proposed for the river basin - the main river and its tributaries - could add capacity of nearly 6,000 MW, according to the Washington-based Stimson Center.
The dams in Laos are much smaller and the current 64 generate less than 5,700 MW, but there are 63 being built and proposals to add more than 300 so that the electricity capacity from its part of the Mekong basin would surpass China’s.
“It is using the river for only one use – hydropower - and the other users are being marginalized,” said Pianporn Deetes of the International Rivers group.
The fact that China said the dams could help to regulate the water levels on the Mekong - providing more water in the dry season and storing it in the monsoon - was itself worrying, she said.

The life of the river has adapted to monsoon floods that bring silt and allow fish to migrate and a dry season that leaves land exposed where birds can breed.
Trying to manage the flow of the river through planned releases from dams can lead to unpredictable swings that suddenly wash away boats or livestock.

The fishermen of Nakhon Phanom have started using smaller mesh nets and finer lines now that the fish are smaller. They go out less frequently and make much less money.
“I wish the seasonal pattern would return so fish can lay eggs as they used to,” said fisherman Chai Haikamsri, 47.
“I wish the dams would not disrupt this anymore.”

Additional reporting by Panarat Thepgumpanat and Matthew Tostevin in BANGKOK and Wu Huizhong and Thomas Suen in BEIJING; Editing by Robert Birsel
Our Standards: The Thomson Reuters Trust Principles.

US warns dams give China 'control' of Mekong River 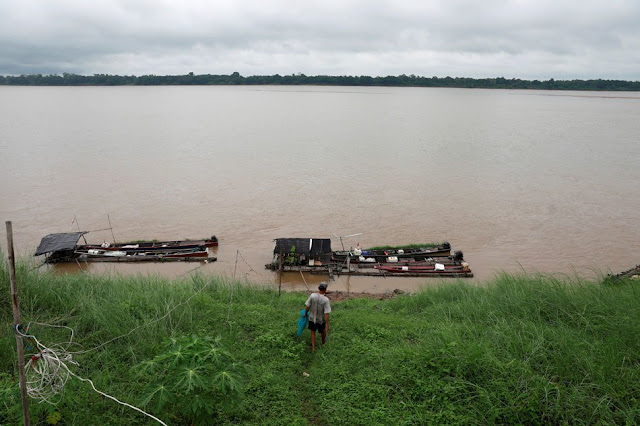 China is taking control of the flow of Southeast Asia's most important river through a dam-building "spree", US Secretary of State Mike Pompeo warned Wednesday, as water levels along the Mekong reach record lows.
The famous waterway starts in China and twists south through parts of Thailand, Laos, Myanmar, Cambodia, and Vietnam, feeding 60 million people through its basin and tributaries.
But environmental groups fear Beijing-backed dams straddling the river upstream will destroy fish stocks and allow China to manipulate water flows.
Pompeo said Chinese plans for the river, which include the blasting and dredging of waterbeds, represent "troubling trends".
"We have seen a spree in upstream dam-building that concentrates control over downstream flows," he said in Bangkok at an Association of Southeast Asian Nations summit.
The meeting marked a decade since the launch of the Lower Mekong Initiative, a US-funded development program, and Pompeo used the opportunity to point out flaws in China's activity on the river.
He accused the Asian giant of operating extraterritorial river patrols and of pushing new rules that would weaken the Mekong River Commission, an intergovernmental group monitoring construction along the water.

The top US diplomat is in Bangkok to reaffirm his country's "Indo-Pacific" vision for a region increasingly under Chinese hegemony.

The Mekong has garnered little attention next to the US-China trade spat or the stalled negotiations over North Korea's nuclear program.
But severe drought in Thailand has put China's Mekong vision under rare global scrutiny.
Last month the Mekong River Commission said river levels in June and July had dropped to "among the lowest on record".
Beijing's foreign minister Wang Yi said Wednesday that China had released more water "in order to help Thailand".
"Thailand's suffering is China's suffering," he said.
Conservationists have also pointed to safety and environmental dangers posed by mega-dams in neighboring Laos.
The human cost of the dam-building frenzy was laid bare last year when a massive hydropower project collapsed in southern Laos, killing dozens.

Posted by nhomlymha at 1:46 PM