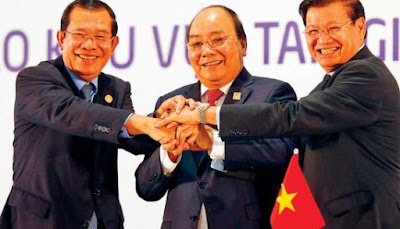 When asked about his success as a soldier and politician, US President Eisenhower said: “Whenever I run into a problem I can’t solve, I always make it bigger. I can never solve it by trying to make it smaller, but if I make it big enough, I can begin to see the outlines of a solution.” Eisenhower’s approach to problem-solving made him a successful leader. And it may be relevant to the situation in the Mekong today.

While they are neighbors, Cambodia, Laos, and Vietnam vary greatly in size, population, natural resource abundance and level of economic development. Their interests do not necessarily converge. In fact, when it comes to the Mekong, they’ve clearly diverged. Having dammed the headwaters of the Sesan and Srepok rivers, Vietnam is now primarily concerned about water and sediment delivery to the economically vital Mekong Delta. Without sufficient sediment to replenish the land, the delta will sink beneath the East Sea – a problem compounded by unsustainable groundwater pumping and rising sea level.

Laos considers the Mekong primarily as a resource to be harnessed for hydropower, mostly for export to Thailand, to generate revenue to drive national development. This has resulted in a boom in dam building over the past 15 years including three dams on the Mekong mainstream.

Cambodia, home to the Tonle Sap, the world’s largest freshwater fishery, is more circumspect about hydropower because of its impact on fish production in a country whose population depends on freshwater fish for 75 percent of its animal protein. But given low levels of electrification and near-total dependence on expensive imports for its electricity supply, there is a pressing need to develop domestic sources of power. Hydropower is currently the favored option, despite food security concerns. In late 2017, the 400 MW Lower Sesan 2 (LS2) was complete, closing the Srepok and Sesan to the free passage of migratory fish and trapping almost all the upstream sediment.

These divergent interests have brought the three countries into increasingly open disagreement. Vietnam sees the survival of the Mekong Delta, responsible for 50 percent of its rice and 75 percent of its high-value fruit and aquaculture production, as a matter of national security. Laos, which has few foreign-exchange generating alternatives, is determined to build more dams. In pursuit of energy security, Cambodia is considering building two huge dams, the Stung Treng and Sambor, on the Mekong mainstream.
Whether or not these dams make economic sense is increasingly open to question given the dramatic decline in the price of solar and wind power, which have contributed to Thailand’s decision to suspend the power purchase agreement for the Pak Beng dam in Laos. As an indication of how fast technology evolves, under a 10-year old contract, the Cambodian government is obliged to buy power from the Chinese-owned LS2 at $0.07/KWhr, a similar price as solar today but at much higher environmental cost (LS2 is projected to singlehandedly reduce basin-wide fish production by almost 10 percent).

We seem to have reached a stalemate. Vietnam has adopted a victim mentality, protesting against dams but without presenting any alternatives. In Laos, hydropower is almost entirely dictated by foreign, mostly Thai and Chinese, firms and receives very little revenue from dams built under 30-year build-own-operate-transfer contracts. Cambodia is keeping its options open. Instead of bringing these countries together, the discordant development of the Mekong is pushing them apart.

An exclusive focus on water does indeed limit the scope for cooperation because there are no solutions that currently satisfy all three countries. However, it is also the case that Cambodia, Laos and Vietnam can each offer its neighbors something they cannot achieve by themselves. Laos and Cambodia can address Vietnam’s concerns by prioritizing dams that minimize downstream impacts and by expanding the use of non-hydro renewables. And Vietnam has much to offer its neighbors.

Vietnam can invest in a national grid in Laos that allows Laos to charge transmission fees, thereby both reducing its dependence on hydropower and providing an immediate income stream. A national grid in Laos would also accelerate the buildout of solar and wind farms and permit regional power trading. Together, these would let the three countries meet projected demand at a lower cost and with far fewer dams. Similarly, Vietnam can help Cambodia speed up rural electrification and generate foreign exchange by building large-scale solar plants in Cambodia where land is much cheaper. This would reduce the need for mainstream dams.

Vietnam can strengthen cooperation on other natural resource sectors. Cambodia and Laos are struggling to suppress illegal logging in the face of rising demand from Vietnam for timber to feed its wooden furniture business, which exported more than $8 billion in 2017. Similarly, the proposed nomination of Him Nam No as Laos’s first natural World Heritage Site is threatened by the illegal wildlife and timber trade in which Vietnam plays a major role as hunter, consumer and trafficker. Simply put, Cambodia and Laos cannot enforce their own forestry and wildlife laws without Vietnam’s active cooperation.

So per Eisenhower’s dictum of expanding a problem to solve it, expanding regional coordination beyond water to include energy and natural resource sectors could open the door to new opportunities for regional cooperation on the basis of reciprocity and synergies. This approach would shift the discussion from zero-sum – my gain results in your loss – to mutual benefits across multiple sectors.

One could imagine Cambodia, Laos and Vietnam negotiating a “grand bargain” covering water, energy, timber and wildlife that helps each country achieve key development objectives at much lower environment, social and political risks. As their economies grow and become increasingly interdependent, the mutual advantages of such an agreement will grow. And as the country with the most advanced economy and is most vulnerable to the impacts of upstream hydropower, Vietnam has the capacity and self-interest to lead the negotiation process.

Jake Brunner is head of IUCN’s Indo-Burma Group based in Hanoi; Brian Eyler is director of Stimson Center’s Southeast Asia Program based in Washington, DC.